Who is Prince Konoe?

Born on October 12th, 1891, Prince Konoe Fumimaro was the 24th head of one of the most ancient and noble Japanese families, the Fujiwara. Dating back to 646, the House of Fujiwara has been one of five Japanese families “Gosekke,” meaning five regent families from which Japanese emperors often were chosen. In the 11th century, they ruled over Japan and, in 1202, they took the name of Konoe. 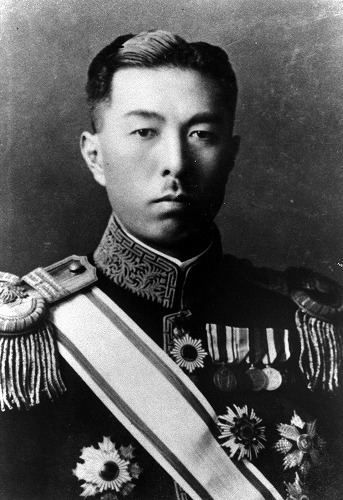 Prince Fumimaro Konoe
Although Prince Konoe was born into a noble family, he became an orphan at a young age. His mother passed away when he was eight years old, and his father died when Konoe was fourteen. He was then brought up by his uncle, Prince Tokugawa Iesato. As creditors and debtors frequented his house, his friendships diminished. In college, he began reading “extremist literature from Western Europe” and, influenced by Professor Kawakami, a leading Marxian Japanese economist, Konoe became an ardent student of Karl Marx, Tolstoi, and Kropotkin. It was at Kyoto Imperial University where he met Prince Saionji Kinmochi, who became his political mentor.
In 1917, after graduating from Kyoto Imperial University with a degree in Law and Politics, Konoe was named a member of the House of Peers, the upper House of the Imperial Diet under the Constitution of the Japanese Empire. There were 145 hereditary members, 106 imperial appointees as well as high taxpayers. A year after entering the House of Peers, he joined the Home Ministry as a non-regular staff member. The Home Ministry managed the internal affairs of the Japanese Empire, including local administration, police, public works, and elections, as well as monitoring people. His involvement in the House of Peers was significant, and he led an active campaign to reform it. As the members of the House were not elected by the people, they were responsible for supporting the government along with the Lower House in smoothly executing policies. Konoe’s passion for true democracy was obvious. It could be said that “not a single important national issue has failed to receive his thoughtful consideration or to feel his influence before settlement.”

Konoe was tall and gangling with hooded eyes, a long face, and the undershot jaw of the Fujiwaras. He was described as very dark, sad, morose, and indolent. Some described him as an effete aristocrat who was lazy, cynical, confused, and voluptuary with wandering intellectual interests and no strong convictions. He was said to be “a bundle of nerves” and so fussy about hygiene that he sprinkled alcohol on an apple before eating it and dipped raw fish in boiling water before touching it. He also suffered from insomnia. For recreation, he enjoyed watching wrestling matches and playing golf. One report described him as very amiable and was quite interested in literature. Among his friends were the novelists Kikuchi Kan and Yamamoto Yuzo. 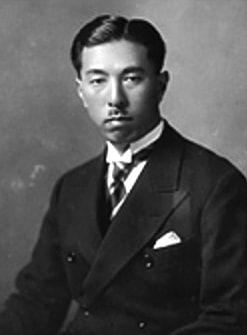 Fumimaro Konoe, early years.
However, even in his early days of working in the government, he continued reading Marx and other Western literature and even thought of renouncing his titles, like his brother had, and moving to the United States. It should be noted that his brother, Viscount Konoe Hidemaro, renounced his royal ranking when he chose to become a professional musician. In 1918 before the Paris Peace Conference, Prince Konoe Fumimaro published an essay titled 英米本位の平和主義を排す “Reject the Anglo-American-Centered Peace,” setting forth his beliefs on the principles of governing the peace and happiness of mankind. In it, he attacked the western democracies as hypocritically supporting democracy, peace, and self-determination, arguing that these countries actually undermined these ideals through their own version of racially discriminatory imperialism. The essay stressed the importance of greater justice among individuals and equality of rights and opportunities among nations.
It was very obvious that Prince Saionji, who was accused by the Nationalists of Japan as being a globalist, took a liking to Prince Konoe and wanted to groom him to be a statesman. In 1919, Prince Saionji convinced Konoe to attend the Paris Peace Conference as his secretary. The conference turned out to be hugely disappointing. During the conference, he was one of the Japanese diplomats who proposed the Racial Equality Proposal for the League of Nations. It received the support of Japan, France, Serbia, Greece, Italy, Brazil, Czechoslovakia, and China. However, it was overturned by U.S. President Woodrow Wilson. After returning to Tokyo, Konoe devoted himself to repairing his family fortune with a successful marriage as well as connecting with notable friends. He also founded “The Oriental Free Press,” whose focus was the constitution of the Japanese Republic headed by the Emperor. Meanwhile, he was very active in politics and often was credited in large part for Japan’s adoption of universal manhood suffrage in 1925.