Search for the Truth

​"Wang Xuan deserves a special paragraph. Wang is one of contemporary China's greatest patriots. She has dedicated her life to seeking justice for those Chinese who were victimized by Japanese BW and CW experiments. Someone called her 'The Joan of Arc of China,' and the comment is not an overstatement."
​
​- Dr. Sheldon H. Harris, historian and author of “Factories of Death”

​Sheldon Harris wrote that statement more than a decade ago and, since then, Wang Xuan has done so much more. At the very least, her work deserves a book, which is why this one exists. Born in 1952 in Shanghai, China, Wang Xuan graduated from a university in China and worked as an English teacher for over ten years. In 1993 she received a Master's Degree in Education with distinction from the University of Tsukuba in Japan. In 1995, she discovered by chance what would turn out to be the cause to which she has dedicated her life. Reading a news article in an English newspaper about the First International Symposium on Unit 731 held in Harbin, China, she learned that Japanese peace activists had been reported going to Chongshan Village, Yiwu, Zhejiang Province, China, to investigate the plague epidemic caused by Unit 731’s bacterial warfare in World War II (WWll). Although in the early 1940s the United States had details on Japanese bacteriological warfare, they were not published in regard to the national interest. Due to executive order 8985 by President Franklin Roosevelt, many Japanese atrocities went unreported. It was thought that if citizens were informed of the severity of the Japanese brutality, their morale would be devastated and national interests harmed. After the war, justice was never properly administered in relation to victims as well as the national interest. 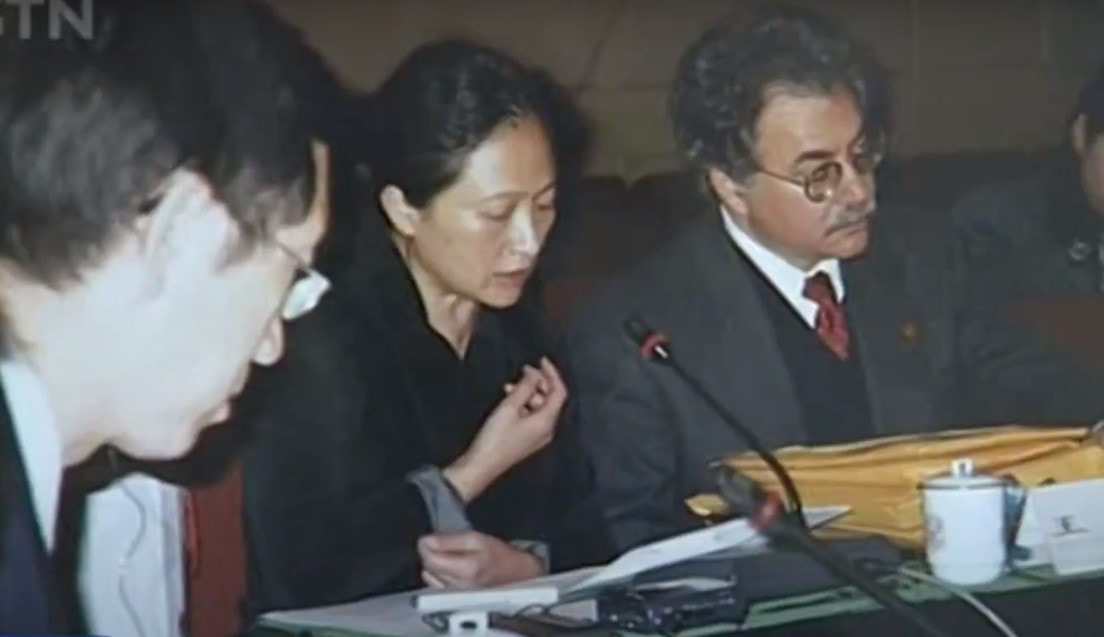 Wang Xuan (in the middle) from YouTube
Since 1997, Wang Xuan has led 180 Chinese plaintiffs from Zhejiang and central China's Hunan Province in demanding fair judgment of their accusation that Japan engaged in criminal germ warfare. For the first time, in 2002, the Tokyo District Court acknowledged that Unit 731 "used bacteriological weapons under the order of the Imperial Japanese Army's headquarters" in occupied China in the 1930s and 1940s. In 2007, the Japanese Supreme Court upheld the determination of historical facts of bacterial warfare by the lower courts, but still rejected the claim for compensation. The truth about the unconscionable acts by the Japanese Imperial Army, which had been concealed for so long, was finally recognized as factual. The result was an important milestone achieved by Wang Xuan after years of hard work. However, there remains a lack of direct evidence that the plague epidemic was caused by the Imperial Japanese bacterial war in WWII. Despite the court finding, the Japanese government continues to deny that its Army ever used biological agents in China. The victims were not compensated for the devastating damage done to them. Their legs remained rotten decades after the war. Searching for primary source documents to prove that the Imperial Japanese Army was responsible for the crime of germ warfare, Wang Xuan and Japanese Peace activists collected thousands of reports from various sources. In 2019, Wang Xuan co-published a six-volume book entitled "Japanese Biological Weapons Combat Documents." This book is an initial summary of what Wang Xuan has found in the past more than 20 years. It contains a collection of documents from various archives including Dugway Archive, University of Virginia’s Law Archive, and the U.S. NARA (National Archives and Records Administration). The truth behind the bacteriological warfare in China is brought out into the light of day in the following pages.

Beginning of the research

In the mid-1990s, while living in Japan, Wang Xuan read in the newspaper about a group of Japanese peace activists heading to a village named Chongshan in Yiwu to investigate the plague that killed one-third of the population. After reading the article, she decided to reach out since the villagers spoke a different dialect than Mandarin. The Chongshan dialect is familiar to Xuan since that village was her father’s hometown. At the time, she did not foresee herself spending the next two decades of her life fighting for justice for the victims of Imperial Japan’s biological warfare program in China.
Chongshan, Yiwu, is located in the Zhejiang province of China. Zhejiang was of strategic importance in WWII, as several airfields in the area were used as Allied bases. The Zhejiang-Jiangxi Railway also was viewed as an important supply line. The Imperial Japanese Army then launched strategic attacks on the railway from May to September of 1942. This was also directed at the allies in retaliation for the “Doolittle” air raids on Tokyo by the U.S. bombers. Due to the number of ground troops in the area, the Japanese Imperial Army considered it considerably more cost-effective to use biological weapons than any other method.
In the case of Chongshan, which was along the Zhejiang-Jiangxi Railway, a plague infested bomb was dropped in the summer of 1942. Two months later, the plague caused the death of 403 residents or one-third of the village’s population by September 1942. According to her father, Xuan’s uncle was one of those who died from the 3 plague. Other regions such as Ningbo and Quzhou had seen plague bombs dropped as early as 1940. 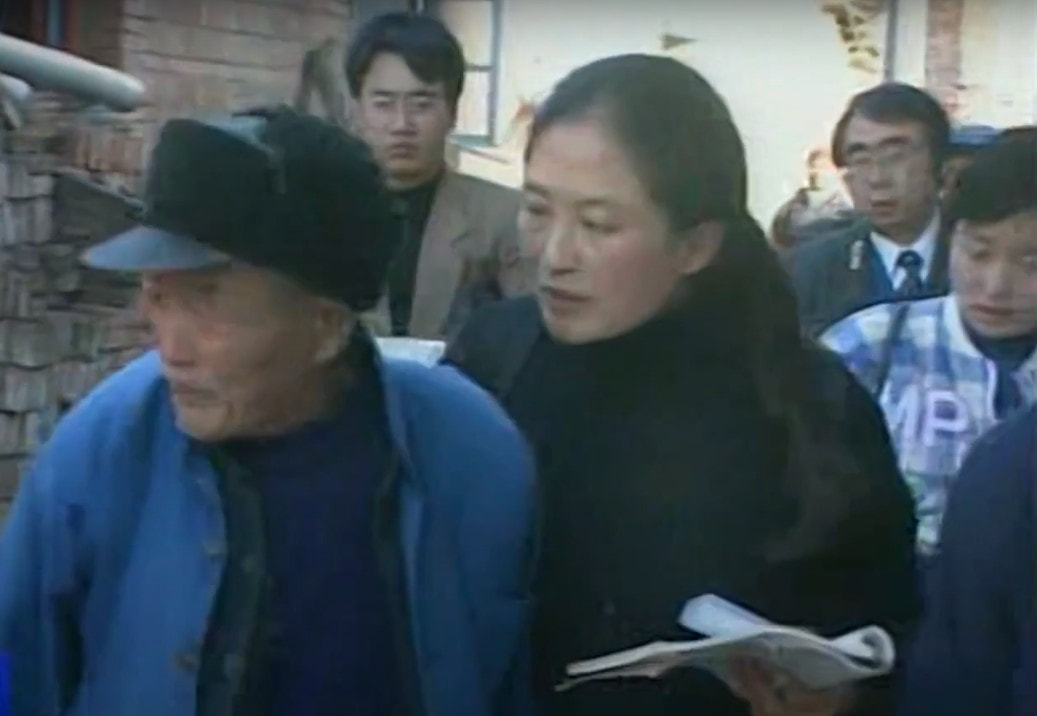 Wang Xuan with a victim of human experiments.
This episode of biological warfare was not only restricted to the plague. Salmonella typhi, rickettsiae, shigella, vibrio cholerae, salmonella enterica, bacillus anthracis, and glanders germs were also used. Cutaneous anthrax, infectious where the bacteria makes a breach through an opening in the skin, constitutes the most prevalent form of anthrax infection. The specific cause of the victims' suffering was a bacteria called Bacillus Anthracis, or anthrax.
At first, one-third of the population was immediately decimated. The remaining villagers were very sick with dysentery and fever, and those who did not die from the plague soon noticed their legs covered with black or red dots which eventually opened, releasing pus from their legs. They were infected with anthrax and glanders, the skin on their legs remained open and rotten, and pus from their legs prevented them from working in the fields. Some of the villagers’ legs had rotten so badly that they lost their legs entirely. Some were not immediately infected but, while laboring in the field, later were infected by surviving spores of germs that survived for years in the soil.
These methods of biological warfare were created in Imperial Japan’s secret wartime biological weapons program officially known as the Epidemic Prevention and Water Supply Bureau led by General Ishii Shiro, which included at least 26 locations, most of which were located in China. The best-known ones were Unit 731 and Unit 100. Unit 731, located in Pinfang, China focused on human experimentation, biological warfare and chemical warfare. They not only experimented on humans, but also created biological weapons for the most efficient way to infect and kill based on research. Unit 100, a subsidiary of Unit 731 located in Changchun, China, focused on bacteriological, pathological, animal experimentation, organic chemistry, botanical, and preparations for bacteriological warfare. The focus of Unit 100 was to produce anthrax, glanders, and red rust. It is estimated that between 1939-1945, these wartime biological weapons programs killed and poisoned more than a million Chinese, Koreans, Mongolians, and Russians resulting from human experimentation as well as poisoned water sources and bubonic plague bombs. The Chinese countryside alone suffered more than 250,000 deaths as a consequence of Japanese biological warfare.