While the underground movement underwent initial steps to establish communication with the West, the effects of the Phibun government’s alliance with the Japanese began to take hold.​ 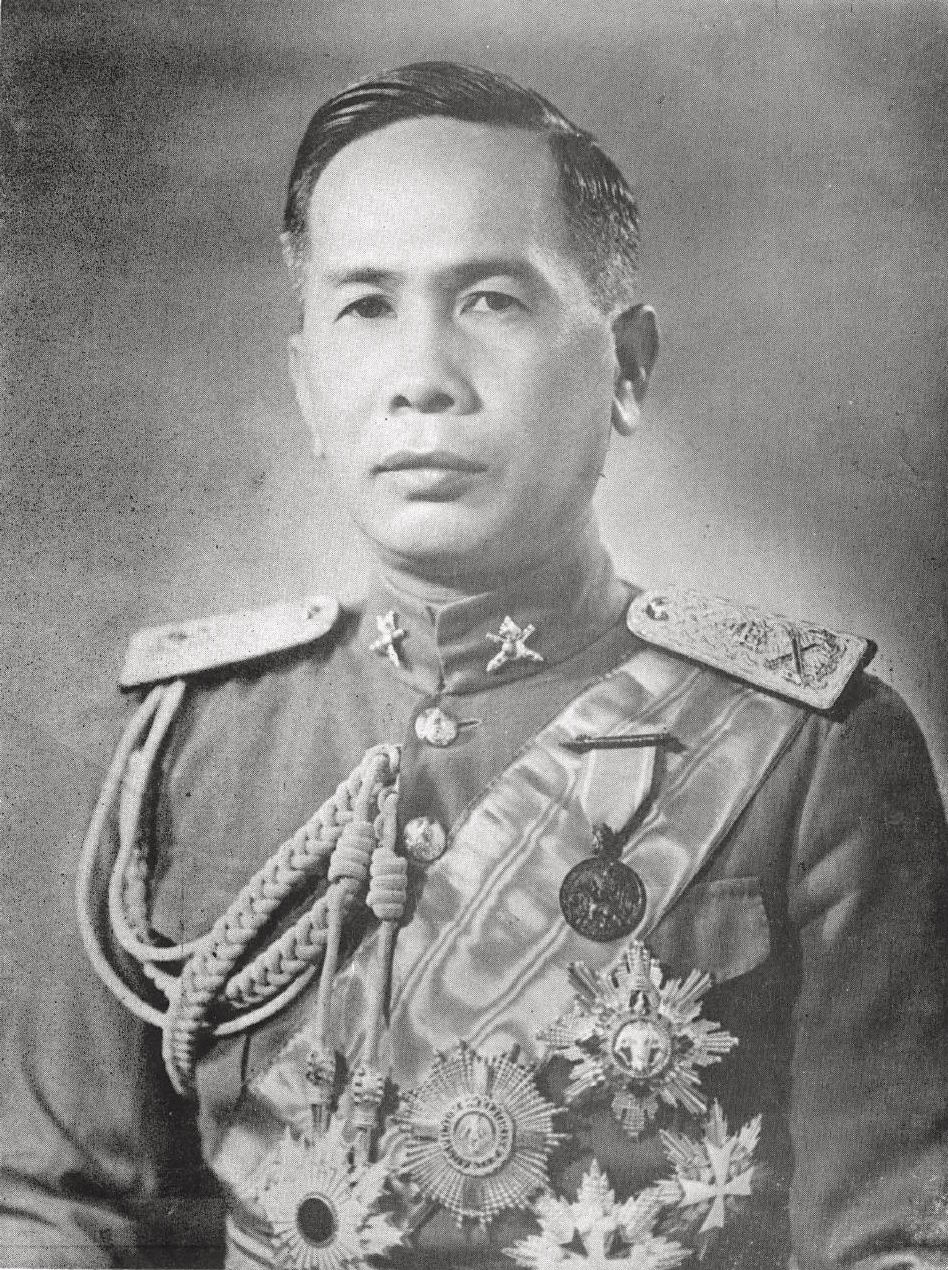 Field Marshal Plaek Pibulsonggram
Domestic Policies: The Concept and Implementation of Thaification
Between 1939 and 1942, Phibun enacted a series of cultural mandates called the ‘state edicts of Thai society’ (รัฐนิยม). These edicts focused on defining and standardizing what it meant to be ‘civilized’ Thai individuals: 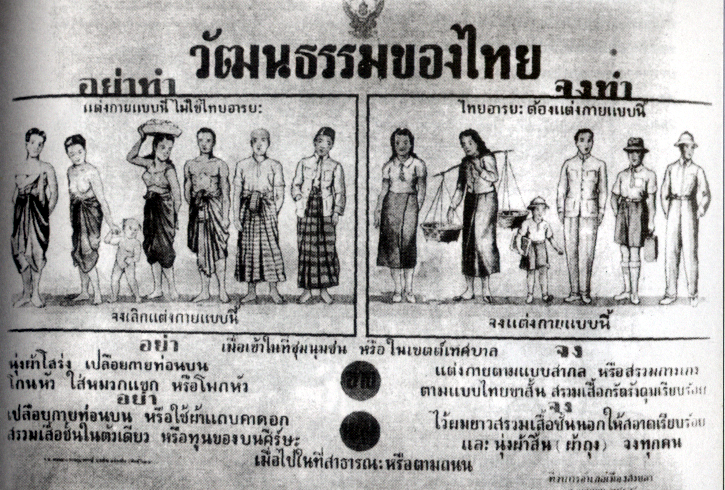 Thai poster from the cultural mandate era demonstrating prohibited dress on the left and proper dress on the right.
By Government of Thailand. - Thai Government poster, Public Domain, https://commons.wikimedia.org/w/index.php?curid=4656662
Phibun and his administration also moved to push for economic nationalism. These policies, in particular, took a toll on the ethnic Chinese population and such Anti-Chinese sentiment on the economic front was a result of two elements. The first was the growing realization that large amounts of money were being remitted back to China by Chinese Thais, constituting a substantial drain on the Thai economy. The second element was in relation to the growing anti-Japanese movement in Chinese Thai communities. Beginning during the 1937 Sino-Japanese War, Chinese Thai communities organized a series of boycotts against Japanese goods. As Japan had gradually become a major trading partner to Thailand after the signing of the 1941 Free Passage declaration, Phibun and his administration believed that the boycotts would harm the Thai economy and threaten foreign relations.  In response, Phibun’s government took over Chinese-run businesses. New or renewed contracts would then go to ethnic Thais or ethnic Chinese businessmen who were close to the administration. Other restrictions and systematic discrimination experienced by ethnic Chinese were unfair taxes, limited job opportunities, Chinese school closures, the abolishment of Chinese newspapers, and an unfair annual alien registration fee.

Lastly, the most impactful and consequential domestic policy to ever come out of the Phibun administration is the consolidation of political power in the Thai military. Furthermore, he approved legislation that postponed democratic transition for another ten years, preserving the seats and ranks of non-elected officials as well as spearheaded expansionist activities to reclaim formerly lost territories in Laos and Cambodia.

On top of centralizing his power, he had built a cult of personality around himself, advertising his images throughout the country, from billboards to newspapers. Slogans like ‘One nation, Thailand, one nation, Phibun Songkhram, one aim, victory’ and ‘Our Nation’s Security Depends on Believing in Our Leader’  as well as topics that spoke to irredentism to military exceptionalism were constantly blasted over the radio. Phibun’s centralization of power in Bangkok was especially detrimental to sub-national territories, especially in the indigenous or ethnic Malay Muslim areas, who were now deprived of their ability to determine their local laws, attend religious schools and services, and elect provincial representatives. These actions would later lead to the issue of ethnic fractionalization, prolonged conflict, and violence in Thailand’s Deep South for years to come.

International Policies: The Birth of the Siamese-Burma Railroad
The Japanese position in the Pacific was beginning to waver. After the Battle of Midway and the Battle of the Coral Sea in 1942, passages to the Andaman Sea and the Bay of Bengal were now occupied by Allied forces. Japan needed an alternative supply route to sustain a successful campaign in Burma. They turned towards mainland Thailand and planned to build a railway connecting Thailand and Burma. Ignoring the Geneva Protocol that forbids using POWs for forced labor, degradation, or punishment, Japan gathered captured Allied POWs from Singapore and Indonesian prison camps and immediately put them to work. 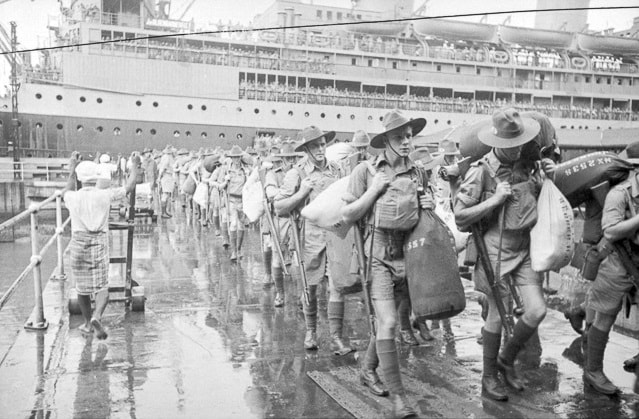 Australia’s 8th Division  disembarking into Singapore. Troop members either died defending posts in Malaya and Singapore or died in captivity working as POWs on the Thai-Burmas Railway.
By Nichols, Melmer Frank - This tag does not indicate the copyright status of the attached work. A normal copyright tag is still required. See Commons:Licensing for more information., Public Domain, https://commons.wikimedia.org/w/index.php?curid=6297654
Although officially known as the Thai-Burma Railway or the Siam-Bumas Railway, the nickname “Death Railway” was adopted due to the terribly high number of POWs and Asian laborers who died constructing the war-time infrastructure. Though records vary, approximately 14,000 Allied POWs and 90,000 Asian laborers lost their lives either due to horrific work conditions, starvation, vitamin deficiency, malaria, or dengue fever. 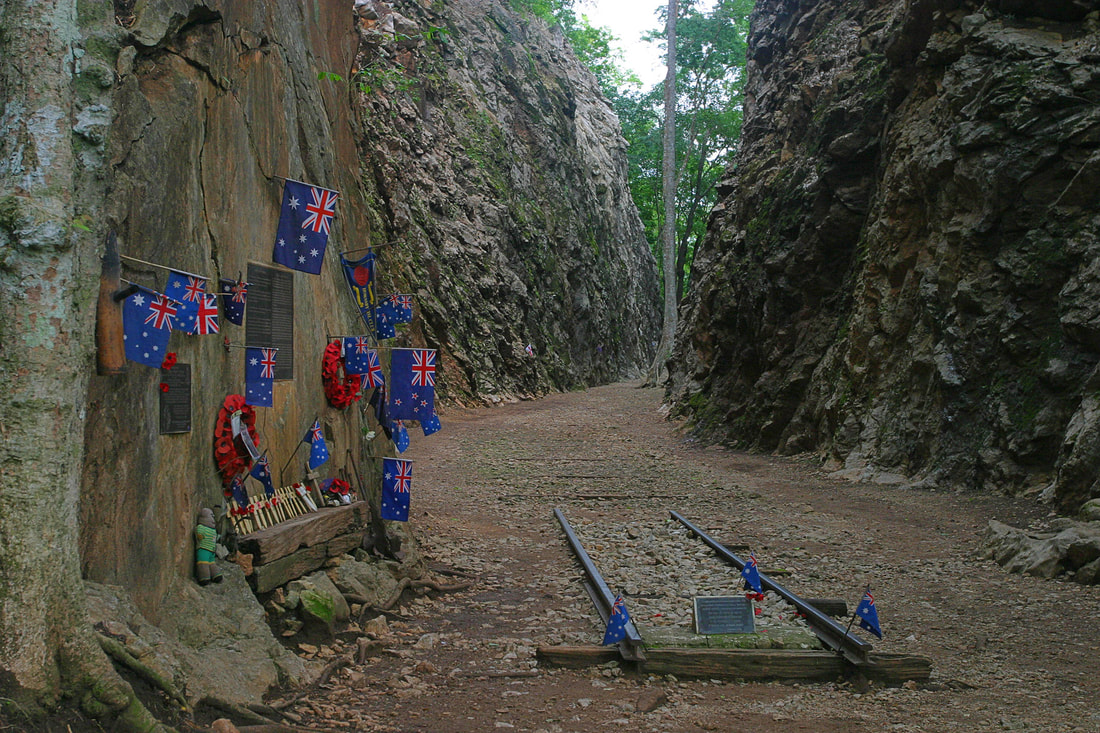