The Rise of the Communist Movement

The Great Depression and Its Effects on Indochina

The most notable global event of the year 1930 was the Great Depression. Areas that were more connected to the global economy through trade were more affected, meaning that French Indochina and its rice trade was influenced by the global depression. Prices began to fall around 1930 and recovered by 1934. The fall in rice prices made it easier for rice buyers to purchase rice, but those who sold their surplus rice faced problems. Rice sellers had to make up for lost income and taxes by selling more rice than they usually would, and landlords and debtors kept up the pressure.
Economically, the subsistence-based farmers of the north were less affected because they did not rely on exports. Tonkin did not lose much cultivated land in comparison to Cochinchina, though concessions were given up by both the French and Vietnamese landowners. However, the overpopulation and high parcelization of land led to high unemployment rates. In addition to economic pressures, there were both floods and droughts during during 1930, affecting the rice harvest. The meager harvest, combined with the lower prices of rice, led to a food shortage in the region that caused famine in some areas of Annam and Tonkin. The events of the early 1930s must be considered within the context of food shortages and economic hardship caused by the depression that would continue to affect the Mekong Delta region as the Pacific theatre of the Second World War grew more intense. 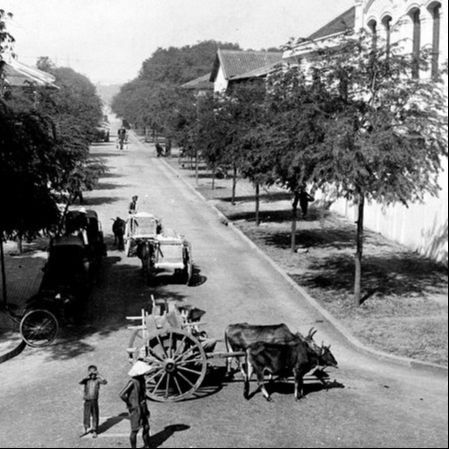 Vietnam farmers. Source:Wikipedia
Perhaps one of the most important events of 1930 was the formation of the Indochinese Communist Party (ICP) in the February of that year. The success of the ICP in 1945 was predicated on the specific condition of the anti-colonial movement in Vietnam during the 1930s and 1940s. In addition to the communists’ message of liberation from the economic hardships of French colonialism, the lack of a coherent rival organization made it easier for the ICP to expand its influence. The Yen Bai Mutiny in February 1930 coincided with the foundation of the ICP, just as it removed the ICP’s greatest rival organization.
The Vietnamese Nationalist Party (VNQDD) embodied the first generation of revolutionaries’ philosophies, and was founded in 1927. Based on the model of the Kuomintang (KMT) in China, it was ideologically confused but traditionalist in nature. Despite its ideological confusion, the VNQDD remained a rival to the infant communist movement in Vietnam. However, their penchant for violence in the quest for independence led to their downfall. First, the assassination of the director of the General Office of Indochinese Manpower in 1929 led to a French-led purge of the VNQDD’s regional sections. After the destruction of numerous cadres due to political violence, the party planned one last act of rebellion in the garrison of Yen Bai. However, the French were already informed of the mutiny, and it was easily squashed within a day. 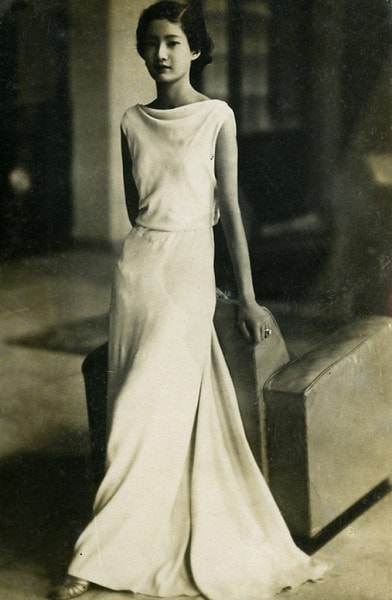 Young empress Nam Phương in Da Lat was the first and primary wife of Bảo Đại, the last emperor of Vietnam, from 1934 until her death. Source:Wikipedia
This led to the destruction of the VNQDD, as the leaders of the organization were quickly arrested after the failed mutiny. For the infant communist movement, the fall of the VNQDD proved that revolution without a specific ideology was doomed to fail. Additionally, it meant that the communist movement had no other ideological or major organizational rival, which led to communist domination of the anti-colonial movement.
Meanwhile, the communist movement itself was gaining traction as it developed from a number of small movements into a singular party. Up until 1930, Vietnam did not have one communist party. In general, there were two primary groups of communists: the League of Vietnamese Revolutionary Youth (known as the Thanh Nien and founded by Nguyen Ai Quoc) and the Indochinese Communist League (founded by followers of Phan Boi Chan and called the Thanh Viet). The former split in two 1929, and Nguyen Ai Quoc convened a conference in Hong Kong in the name of the Comintern (Communist International) to unify the parties.
In February 1930, the factions agreed to unite and named themselves the Vietnamese Communist Party. However, the party was soon reprimanded by Comintern and ordered to reform, so in October 1930, the party changed its name to the Indochinese Communist Party (ICP) and established their goals and programs, which were followed for the next several years. Much of the organizational apparatus established at this First Plenum in October has remained unchanged up to the modern day. Unfortunately, coming out into the open meant that the party’s leadership was exposed, and many leaders were placed in jail in 1931. Due to the Comintern’s greater involvement in the ICP in the following years, Nguyen Ai Quoc’s influence in the party waned and the party itself experienced several years of internal struggle over the question of nationalism. Nguyen himself was jailed in 1931 and was rumored to have died in prison.

The rise of communist ideology and organizational apparatus in Vietnam was especially prominent in the traditionally belligerent provinces of Nghe An and Ha Tinh, collectively known as Nghe Tinh. After the Yen Bai rebellion and the founding of the ICP, revolutionary activity around the entire country increased under the eye of an increasing number of French troops. This involved the dissemination of communist propaganda, strikes, and even the assassination of minor government figures. However, the French authorities were more concerned with strikes and demonstrations in the more economically important south, so revolutionary activity in Tonkin and Annam, especially in Nghe Tinh, continued.
​This came to a head at the beginning of September 1930 when the French bombed a mass demonstration in Vinh, leading to one hundred and forty-one deaths and hundreds more being injured. In the ensuing chaos, many village leaders gave up their positions under pressure from peasant groups that were organized under the ICP and known as “soviets.” Protests continued as French troops poured into Nghe Tinh to “pacify” the region. This involved razing soviet villages, as well as killing and deporting “rebels,” meaning anyone who was caught by the French troops. 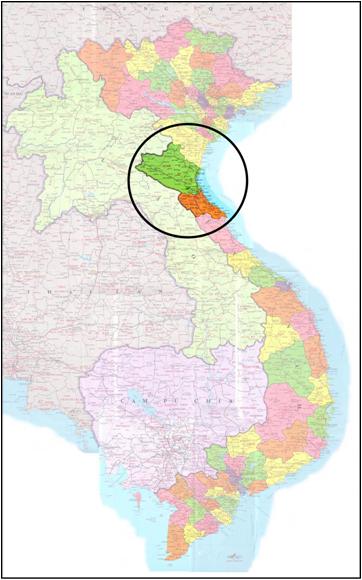 Location of Nghệ An (Green) and ​Hà Tĩnh (Red) in Vietnam. Wikipedia
The sheer brutality of the French troops led to the destruction of numerous villages and the deaths of thousands, leading to a backlash from French citizens. Although the government fired many important officials, many of their replacements were more brutal than their predecessors. By the end of 1931, most communist cadres had been killed or disbanded in fear, and with the ICP’s own leadership in shambles, communism in Vietnam had been dealt an almost fatal blow.
The Nghe Tinh Soviet Movement’s significance lies in its economic and meteorological context and its foreshadowing of the political and economic situation in 1945. Unrest in Nghe Tinh was not simply predicated on the conception of the ICP. Instead, peasants latched onto communist ideology during a period of extreme hardship. Rice prices were at their lowest during 1931, and both the fall harvest of 1929 and the spring harvest of 1930 had failed. The combination of low amounts of paddy and low price led to famine in certain parts of Annam. Much of the unrest during 1930 and 1931 arose from “rice borrowing” expeditions, where rice was often violently redistributed from stocks to the poor. Therefore, famine played an important role in the Nghe Tinh Soviet Movement, as a condition that enhanced the struggle against colonialism carried out by the Vietnamese people.
The role of famine in the Nghe Tinh Soviet Movement foreshadowed the role of famine in the August Revolution. However, the main difference between the August Revolution and the Nghe Tinh Soviet Movement lay in the scale of the movement and the organizational capability of the ICP. Without the degree of planning that went into the August Revolution, as well as the time that the ICP had to grow its organization’s branches across Vietnam, the Nghe Tinh Soviet Movement was doomed. While bursts of uprising continued across Tonkin and Annam, such as the Annam Anti-tax Movement of 1932-1934, further rebellion was brutally crushed by the French. Mass arrests destroyed the ICP’s fledgling organization, leading to a low point in the anti-colonial movement.