The Battle of Shanghai. Background

The Battle of Shanghai, during the summer of 1937, was one of the most important battles between China and Japan as it was the first major battle of the Sino-Japanese War and involved over one million troops from both sides. The battle, due to the surprisingly fierce Chinese resistance, cost Japan their sense of military and martial superiority over the Chinese. It also set the stage for Japan’s desire for revenge for such a costly fight and led to one of the most horrific acts of the war, the Rape of Nanking. In order to fully understand the context behind Japan’s decision to attack Shanghai and the consequent fighting, it is essential to analyze documents and articles that chronicle both the Chinese and Japanese pre-war positions and the events that finally forced the two nations to engage in one of the bloodiest and longest engagements of the Second World War.
​On September 18, 1931, a Japanese-owned railway, near Mukden in Manchuria, exploded. The Japanese accused Chinese nationalists of an attempted assault on Japanese territory and used the explosion as an excuse to invade Manchuria. The untrained and under-equipped inferior Chinese force enabled the Japanese to occupy Manchuria quickly. When the invasion was carried out, the Chairman of the Chinese Nationalist Party, Chiang
Kai-Shek, was more focused on the closer Communist threat and hoped to use Manchuria’s abundant resources to aid in its economic restoration. 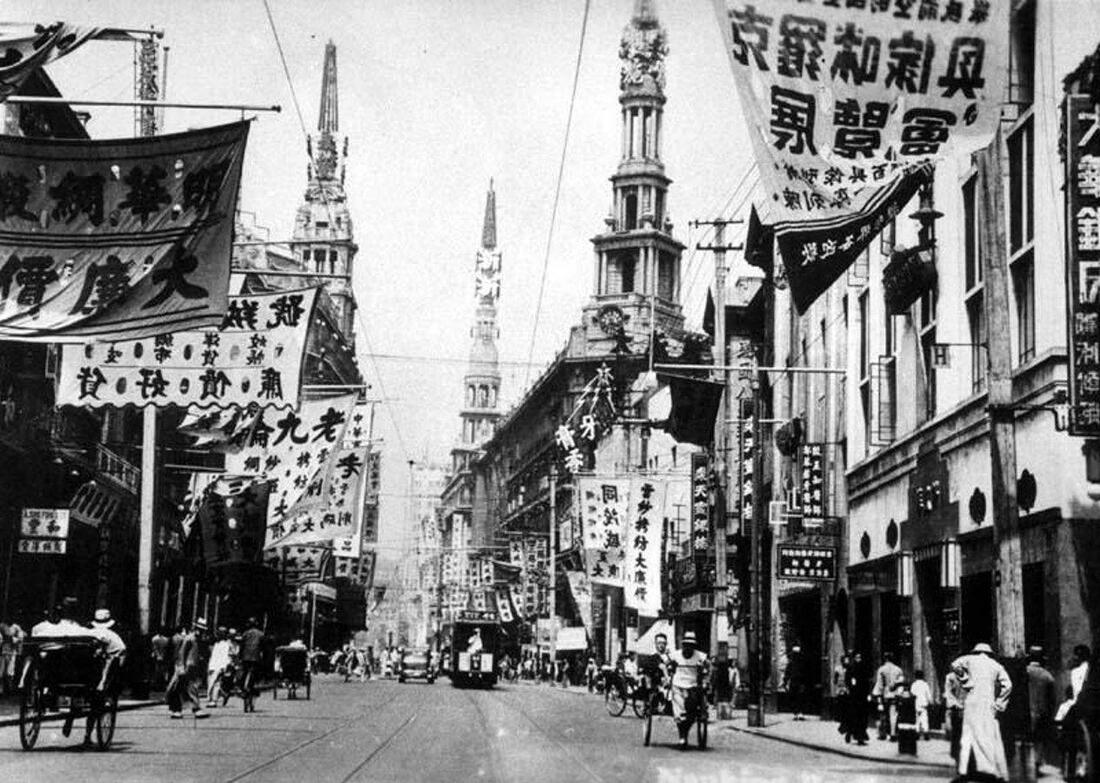 Shanghai streets at 1930s
The need for Manchuria and its natural materials began following World War I. During the 1920s, Japan had been impacted by the global economic crash. The war’s end meant decreased military needs, and munitions factory workers as well as other laborers lost their jobs. Farmers’ prices for agricultural products sank and the lack of employment combined with a severely dwindling food supply resulted in widespread starvation.
On September 1, 1923, Tokyo was struck by the 9.0 Great Kanto Earthquake, followed by a 40-foot tsunami and a fire that destroyed houses across Tokyo and Yokohama. The worst natural disaster in Japan’s history not only destroyed 45% of Tokyo, but caused the deaths of 140,000 residents. The earthquake and its effect on the Japanese people provided the impetus for many militarists and imperialists to further promote patriotism. In turn, this led to both promoting Japanese expansion of colonial territory in East Asia and the onset of spreading anti-Korean propaganda about Korean immigrants poisoning wells.
In 1928, Japan and its population advocated for the invasion of Manchuria and China in order to exploit their resources and territory. Following the global economic crash, Japan felt they could not rely on Western countries for economic support. That lack of trust, in turn, led to a growth in nationalist ideology. Moreover, Japanese military expansion encouraged the belief of a mentality superior to that of China and Manchuria. The Japanese believed that by conquering Manchuria, they would also be freeing it from Chinese influence, which was negatively viewed. Japan’s expanding imperialist and nationalist ideology, caused by economic depression, starvation, and loss of trust in Western economic aid, became a significant factor in the need to lift Japan out of its economic crisis. It also led to feelings of superiority toward other countries, subsequently reflected in the military’s treatment of their subjects, primarily the Chinese.
Despite the greater concern of the communist threat, the Manchurian Incident affirmed to Chiang Kai-Shek and the Chinese people that Japan would use their conquest of Manchuria to threaten China. The Japanese aggression gave way to the rise of anti-Japanese rhetoric among the public. Chiang and the Nationalist government sought aid from the League of Nations and Western Powers, hoping that the League of Nations and countries such as the U.S., Britain, and France would The U.S. drafted a report covering both the Chinese and Japanese positions in North China. In North China in 1934, Japan implemented economically and culturally exploitative policies and strategies. Deciding to use China’s Northern provinces as their base to prepare for war against the Soviet Union, Japan established and expanded transportation and communication networks across North China and Manchuria to allow faster and easier mobilization of their military in order to build up their forces in preparation for their war with the Soviet Union. In Manchuria, Japan, which had faced uprisings from the native population, faced an internal dispute between militarists and capitalists over their control of Manchuria. The structure that became the primary focus of Japan’s move to exploit Manchuria was the South Manchurian Railway Company (SMR).