On June 2nd, 1937, Emperor Hirohito asked Prince Konoe to head a cabinet to succeed the Government of General Hayashi Senjuro; two days later, the first Konoe cabinet was formed. His political doctrine was described as “not doctrines, but common sense.” His intention was to promote the “reconciliation of the rival factions.” As he put it, his job was to “heal strife and eliminate friction.” This was not an easy task as he had to reconcile the army, reconcile the disgruntled civilian parties, and win the electorate’s sympathy. Konoe became the second youngest Prime Minister in Japan’s history and, immediately after his appointment, he created a list of prospective ministers for what was soon tagged “the Telephone Cabinet.” It consisted of all parliamentary groups and could be described as the broadest in Japan’s entire history. There were critics at the time who thought Konoe was setting up a totalitarian government and that he was using his liberal reputation to keep the nation behind the army’s policy. 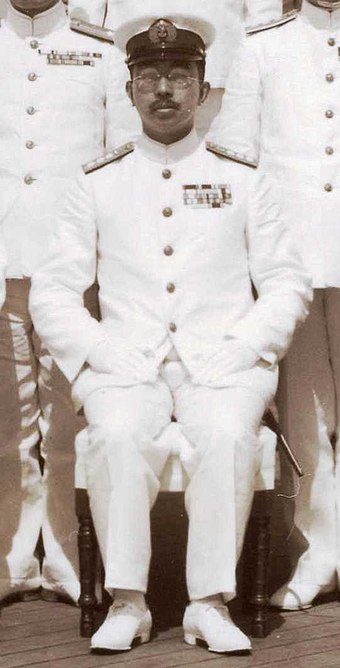 Emperor Hirohito on the battleship Musashi, 24 June 1943.
​One month after his new cabinet took office, the “China Incident” happened on July 7th, 1937. Prince Konoe again used ill-health as an excuse. In this case, he had a “cold” just before the China-Incident. Prince Konoe was known to be responsible for the “peace program” in China, which represented the basis of Japan’s policy in China. On August 28th, 1937, Konoe stated that “Japan’s one course is to beat China to her knees, so that she may no longer have the spirit to fight.” On September 12th, he declared, “We shall thoroughly chastise the anti-Japanese elements in China, not only for our own safety but for the welfare of the Far East. Our mission is to deprive the enemy of fighting strength, set an objective lesson for all China, and give new life to wholesome elements in China with whom we hope to join hands in the truest spirit of friendship and cooperation.” However, some in Japan doubted his statements. Some said that Konoe was willing to condone an unnecessary war with China to prevent murder and revolt at home, and thus accepted the generals’ assurances that the war would be won in six months. In the same year, Italy joined Germany and Japan and signed the Anti-Comintern Pact directed against Communist Internationals, specifically against the Soviet Union.