Life during 3 Years and 8 Months

It is estimated that over 10,000 Chinese women as young as early teens to older women in their sixties were raped by Japanese soldiers throughout the occupation. Most women wore mud on their faces to reduce their beauty, hunched over their backs, and wore black as a protective layer. 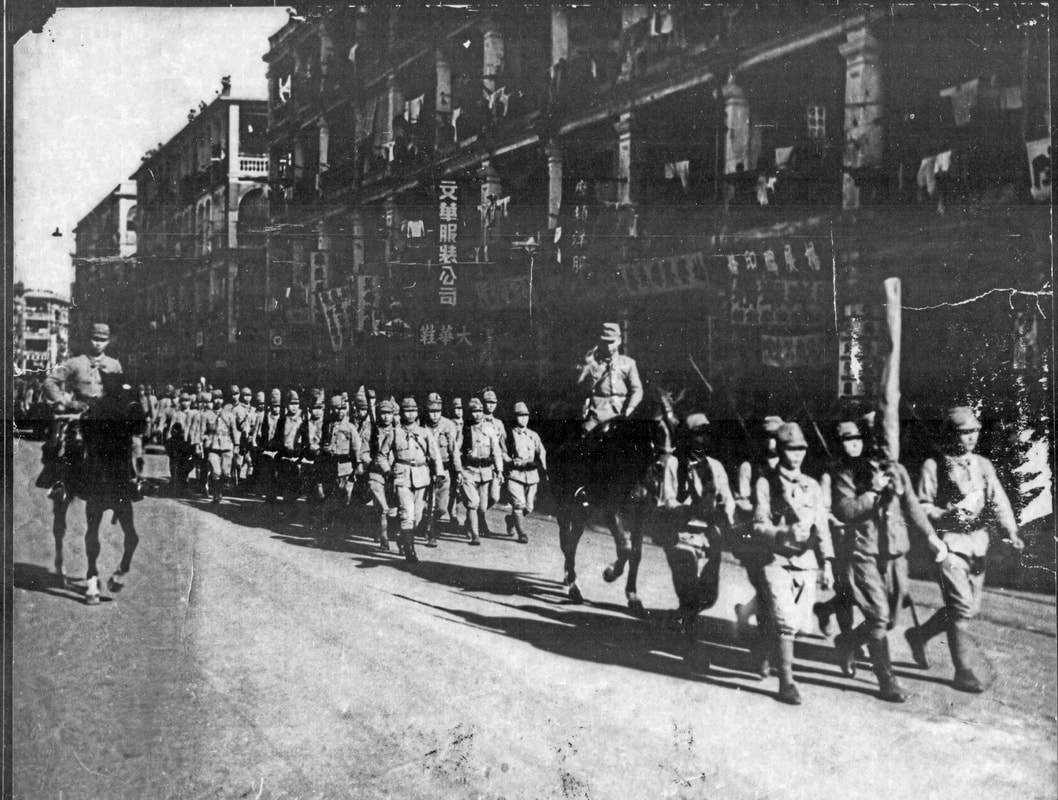 Japanese troops entering Hong Kong on 25 December 1941.
By George Lane, CC BY-NC-SA 2.0
https://www.flickr.com/photos/ssave/9058854115/in/photostream/
Depopulation
Food was a scarce resource throughout the war, leaving very little resources for the locals to live off of. Many starved throughout the Japanese occupation. The Japanese military found it difficult to control a place with as big a population as Hong Kong leaving their new territory vulnerable to a possible counter-attack by the Allied forces. The Japanese government put in charge of Hong Kong therefore tried to recruit all local skilled persons to help rebuild Hong Kong’s infrastructure.

Those who were not deemed skilled found it difficult to find the means to feed themselves and their families. Many tried to flee making their way to the interior of China or to neutral Macau, while those who could not afford to leave suffered or died from starvation or abuse by the Japanese or hired soldiers. The Japanese officials and soldiers conducted a series of searches and exams to remove locals unfit for skilled labor or who posed health risks.

It was estimated that about 1.4 million people were purposefully “removed” or “expelled” from the entire Hong Kong population in order to maintain a manageable population with such limited resources. 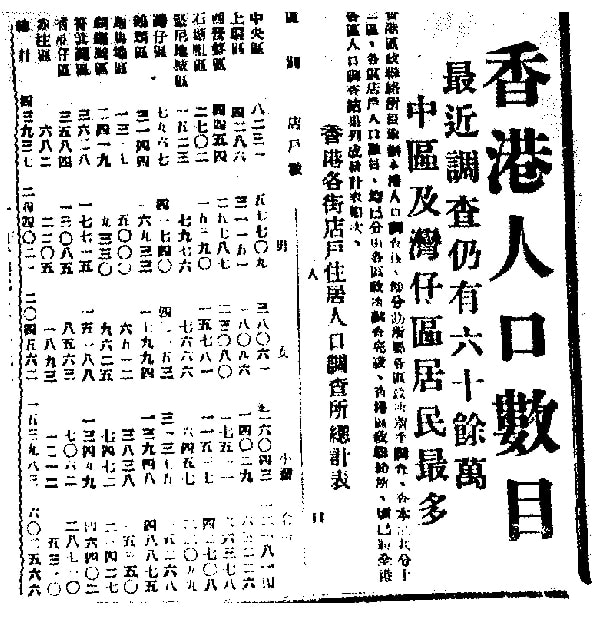 Population decrease due to repatriation, Public Domain, https://commons.wikimedia.org/w/index.php?curid=680206
Kempeitai
By the time that the Governor-General Resuke Isogai took charge, the “First Order by the Hong Kong Governor” was proclaimed. The orders dictated that the Kempeitai not only had the power to intervene in Hong Kong Civilians’ daily lives, but also to discipline the locally recruited soldiers.

During the initial occupation, civilians were forced to trade their currency into military yen. The ratio of Hong Kong currency to military yen was 1:2. However, by July of 1942, the ratio changed to 1:4. The Japanese government continued printing military yen causing hyperinflation. By the end of the war, the price of sugar, cooking oil price, and rice had all been raised over 10 times and all such essential goods were strictly rationed making civilians’ lives unbearable. 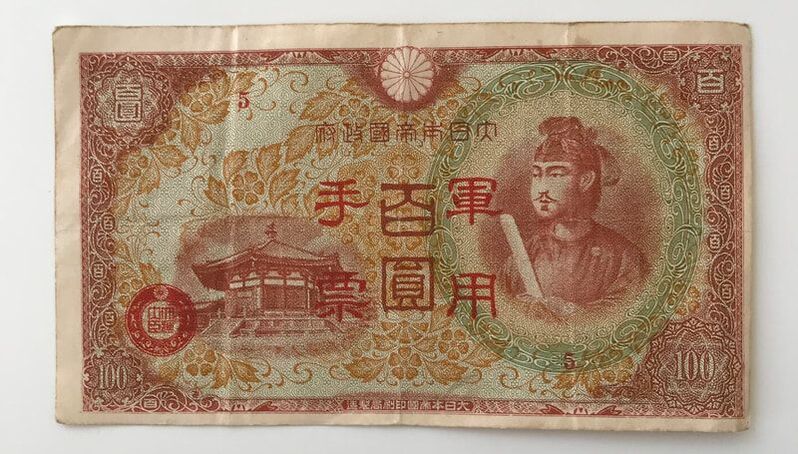 “In exchange, my husband was only able to get 100 military yen out of 500 Hong Kong dollars ... After my husband no longer wanted to exchange due to the low rate, the Japanese soldier chased after him and shot him in the back. My husband came home with a wound and died at the age of 43 since we were not able to find a doctor for him.”
-- Lu Peiying
Source: Shijitsubu 史実部 (History Department), “Showa 18 nen honkon gunsei no gaiyou (soan)”
昭和 18 香港軍政の概要 (素案) (A Summary of Hong Kong Military Rule of the Year 1943),
1943, Last Accessed via Japan Center for Historical Records December 4, 2016;
​Taiwan soutoku-fu Gaiji-bu臺灣総督府外事部 (Department of Foreign Affairs, The Governor -General of Taiwan), “Nanshi nanyo jihou dai 30 gou”南支南洋時報第30號 (Latest Situation in South China and The South Seas, No. 30), 1943, Last Accessed via Japan Center for Historical Records December 4, 2016

Food Ration
Those who remained were starving. Every family was provided a rationing license and every person was only limited to half a pound of rice per day which was about a third of an adult's daily requirement

."The white rice we had for meals previously became the stuff of dreams after the Japanese occupation, during which we only ate porridge with sweet potatoes," said Lam. “Rice was rationed, sometimes as little as 160 grams per person per day. My mother stopped me from going out because it was too dangerous outside," Lam said. "Cooking, eating, and sleeping comprised my daily existence. "
-- Lam Chun

Employment During Occupation
There were not many jobs left for those who decided to stay. Bus drivers were employed for a portion of rice as salary. There were also those who chose to labor for the Japanese to build roads and work in construction for food. Some citizens of Hong Kong took on a more entrepreneurial approach during wartime, and black markets become a very lucrative enterprise that becomes a lifeline for those who can afford it.

The access to everyday goods such as food, medicine, and even toilet paper can become as valuable as gold and silver. Occupied Hong Kong saw people struggling for access and even obtaining these once plentiful goods in pre-war Hong Kong.
Propaganda
It was important for Japan to push Japanization as a part of its goal to establish the Great East Asia Co-Prosperity Sphere. Classes in Hong Kong were ordered to stop teaching English and begin teaching Japanese as part of the curriculum. Students who performed badly in Japanese language exams were subjected to physical punishment.

The press was under heavy censorship during the occupation. By May of 1942, the ten local newspaper outlets were reduced to five. All the radios used at the time had to be registered. Any use of unregistered radio was punishable by the government.
Comfort Women
Comfort women refers to the long held term of those women or girls who were forced into sexual slavery under the Japanese occupation throughout the Pacific Theatre.

In September of 1942, the planned “comfort zone” was to be put in Shek Tong Tsui and Spring Garden Lane in Wan Chai District, Nam Cheong Street and Cheung Sha Wan in Sham Shui Po District, Tsim Sha Tsui and Observatory Road in Kowloon. 1000 Chinese households were forced to move in order to put in the comfort stations.

Although many women were raped during the occupation, there continues to be a lack of testimony from women in Hong Kong who suffered this atrocity dark history. The fear of being ostracised by society as well as the taboo nature of the topic might have kept women in Hong Kong silent all these years about their experiences under the occupation.
King’s Park Executions
The Japanese soldiers executed civilians at King’s Park on a regular basis. Approximately 10,000 civilians were executed at the park. If an adult man was out and mistaken for a guerrilla fighter, he would be executed. The civilians were ordered to kneel on the ground. The Japanese soldiers then used their bayonets to stab them and kick them into the hole.