Get the book now!

With the United States gaining more and more territory, Japan realized that they’re only option was to take over India, where the British were. The key sites for the Japanese were the East Indian cities of Imphal, Kohima and Dimapur, as they were important road and railroad junctions and would further isolate China.

However, the Japanese over-estimated their ability, and were eventually pushed back. The Japanese did not realize how powerful the British were, “both in terms of available strength and dispositions.” For example, the Japanese’s miscalculation of their logistics left them unprepared with limited supplies. 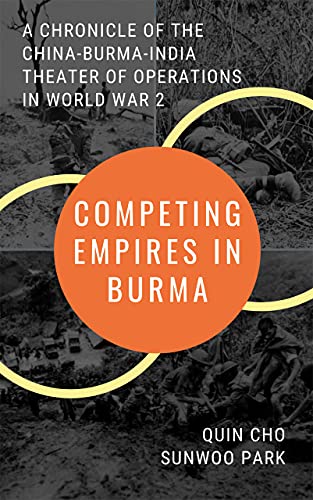 Competing Empires in Burma: A Chronicle of the China-Burma-India Theater of Operations in World War 2
​ALTHOUGH VIRTUALLY UNKNOWN IN THE WEST, the China-Burma-India (CBI) theater provided the backdrop for some of the most operationally complex, logistically challenging, and politically intriguing operations in World War II. This chronicle excavates the forgotten story of the Allies’ only land-based campaign in the Pacific that lasted from late 1941 to the end of the Second World War. It also tells the story of the war within the war, and how Burmese, Indian, and other Asian subjects were fighting in a war against colonialism as well as in a “total war” between competing empires represented by Allied and Axis powers. Following the catalyst of the Marco Polo Bridge Incident in 1937, Japan launched its invasion of China and the full-scale Second Sino-Japanese War had begun. China became isolated from outside aid due to Japanese naval supremacy and its seizure of Chinese ports. As of late 1941, the Burma Road was China’s only means of securing outside aid. While Japan had mostly isolated China, its low stockpile of critical resources meant that it needed to seize resource-rich Southeast Asian colonies (particularly for rubber, tin, and oil) to continue the Second Sino-Japanese War. Consequently, Japan decided to initiate the “Strike South Campaign” (“Nanshin-ron”), which culminated in the seizure of most of Burma by May 1942. In considerable operational detail, this chronicle captures not only the logistical nightmare of fighting in the CBI theater but also the impossible dilemma confronted by colonial subjects in Asia during an inescapable global conflict. Should they trade a western colonial power for a Japanese version? Should the Burmese National Army betray Japan and ally with the British and Allied forces? Could Japan be trusted to “Free India” within a “Greater East Asian Co-Prosperity Sphere” as the India National Army hoped? This fascinating historical chapter is helpful to understand the postwar independence movements that would follow as well as contemporary events unfolding throughout Asia.
=​
Buy Now