The Portents of Famine

Globally, 1943 was a turning point of the Second World War. The Axis powers suffered major setbacks in North Africa, Italy, and China, changing the circumstances within Indochina. However, the power dynamic between Vichy France and Japan was shifting to favor the Japanese. With the Franco-Japanese Accord of January 25, 1943, the Japanese were able to commission 1,125,000 tons of rice from Indochina, a greater amount than the previous year. The Mitsui Bussan Kaisha, the company responsible for handling rice exports from Indochina to Japan, exercised even greater control over the system than in the previous year. In September, the Mitsui Bussan Kaisha squeezed the yield premium system to command even more rice deliveries. This led to increased Japanese control over the rice exports, foreshadowing the military control that Japan would eventually exercise in 1945.
In order to meet the increased numbers demanded by the Japanese, French authorities further decreased the daily paddy ration to under 500 grams. Meanwhile, productivity in Tonkin was steadily declining, falling by about ten kilograms of paddy per year. The combination of the low daily paddy ration, low productivity, and high demands led to the beginnings of famine in Tonkin in 1943. Based on the continuity of their exploitative practices, the French authorities were either unable or unwilling to take steps to handle the issue before it grew into a full-blown famine.
Since peasants were unable to purchase rice at the high market price because they were forced to sell their own paddy at a low price to the state owned comptoir, raising the government’s prices may have provided some relief. However, the Vichy government only increased prices by 25% in 1943, which did virtually nothing to ease the hunger of the farmers. Another solution would have been to transport rice from the more productive region of Cochinchina to Tonkin. However, the Japanese had commissioned the North-South Railroad in late 1942 to transport weapons and soldiers, so government authorities were unable to use it to transport much-needed rice to Tonkin. 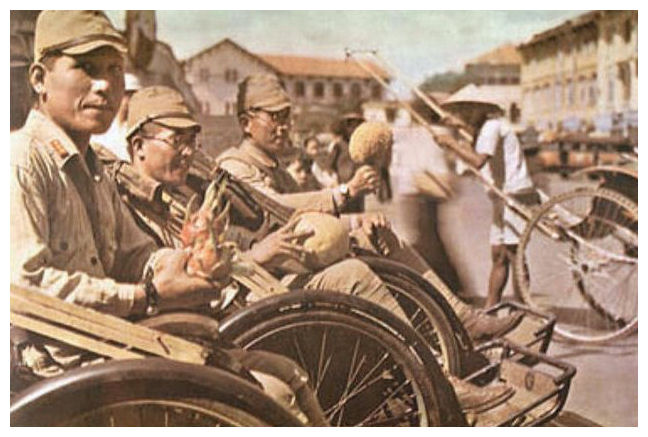 Japanese troops in Saigon during World War II.
The Allied forces were well aware of the Japanese use of the North-South Railroad and other infrastructure in Indochina to support their troops across Asia. Technically, Indochina came under the jurisdiction of the Southeast Asian Command (SEAC), an Anglo-American joint operation led by Lord Admiral Mountbatten. However, the Americans were generally distrustful of European intentions in regions where they held colonial possessions, so initial American action in Indochina was conducted independently of the British or the French. During 1943, the Fourteenth Air Force, stationed in Kunming, began bombing the Japanese transport lines within and off the coast of Indochina. By the end of 1943, any attempt to use land infrastructure or shipping routes to transport rice from Cochinchina to Tonkin was at high risk of being bombed by American forces.

With the help of harsh policies that harmed the farmers of Vietnam, the Vichy government was able to provide Japan with 1,023,471 tons of rice in 1943. The amount of rice that was exported to Japan consisted of 58.3% of Japan’s total rice imports for the year. The land allotted for jute production in Tonkin grew from 300 hectares in 1942 to 14,200 hectares in 1943, all at the expense of rice fields. Rice exports to Japan hit their peak in 1943, even as food availability between 1942 and 1944 fell by as much as 25% in certain provinces. 1943 saw both the beginnings of famine and further integration into Japan’s Greater East Asia Co-Prosperity Sphere, foreshadowing the climactic political and agrarian developments of 1945.
As the beginnings of famine began to affect Tonkin, the Viet Minh began the process of building their popular front. In February 1943, the ICP’s Central Committee met to build a plan to accelerate preparations for insurrection. The Central Committee recognized that they lacked support in the most crucial places since the Viet Minh had been unable to shed their worker-peasant character for a national character that would appeal to a greater sector of the population. Therefore, 1943 saw an increase in efforts to gain Viet Minh support among the rural and urban population. The Viet Minh’s most important strategy during 1943 was to utilize the existing structures of Vietnamese society to gain support from the urban population (Khánh 273). Although Viet Minh support had not yet reached its peak, support from city dwellers became crucial during the August Revolution of 1945, proving the importance of the Viet Minh’s united front strategy.
At this point, the main Viet Minh base remained in the mountains of Cao Bang. In 1943, the Viet Minh claimed over 1,184 militiamen, 5,435 members, and several counties within the three northern provinces of Cao Bang, Lang Son, and Bac Kan. This liberated base region proved resilient, even after the Vichy government began to target Viet Minh activities in the region in November 1943. 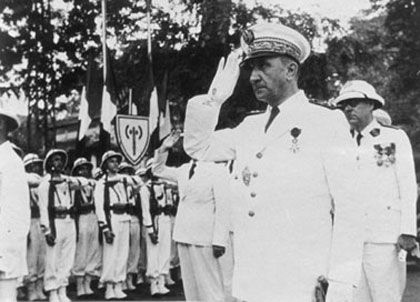 Jean Decoux, French governor of Vietnam during World War II. Source: Wikipedia
The events of the years between 1940 and 1944 were the foundation for the Great Famine of 1944-1945. The advent of the Second World War led to Vietnam’s domination by two colonial powers instead of one, placing Vietnam on the path to disaster. Four years of the enforced requisition of paddy and crop conversion pushed the Vietnamese people to the brink of starvation, especially in the densely populated region of Tonkin. However, leaders of the resistance movement saw the Second World War as an opportunity to escalate the fight for sovereignty over Vietnam. These four years brought the simmering tensions between the Vietnamese, French, and Japanese to the boil, setting the stage for when these tensions would explode into violence and death in 1944 and 1945.