The First Battle of Shanghai

The battle of Shanghai in 1937 was not the only Japanese military conflict with the Chinese in that city. At the start of 1932, after years of prejudice and discrimination based tension and hostility between the two ethnic communities, the Japanese government decided to respond militarily against the discrimination that Japanese nationals faced and sent the navy and army support them. The battle involved the mass destruction of a city and a considerable number of both military and civilian casualties. The catastrophe that Shanghai faced in 1932 became a precursor to the battle between Japan and China in 1937. Both battles became indications of modern urban warfare and the mass destruction and devastation it was possible to inflict. In later years, the consequences of battles in Stalingrad, Manila, and Ortona would echo those of the two battles of Shanghai. Following an attack on Japanese Buddhist priests by Chinese workers who were members of the Anti-Japanese Association, Japanese General-Consul Murai demanded an apology from the mayor of Shanghai as well as the attackers’ arrest and suppression of all anti-Japanese organizations and activities in the city. While the mayor accepted and agreed to those demands, the Chinese military force in Shanghai, which consisted of the 19th Route Army and the 5th Army, was positioned in the city. The 19th Army was positioned in the Hongkew and Chapei (Zhabei) districts. Feeling threatened by that military presence, the Japanese decided to deploy a defensive naval landing based on the need for protection in the event of military action against the Japanese settlement. On January 28th, the initial skirmish took place in the Hongkew district following the arrival of the Japanese naval force. The 19th Army was also threatened by the Japanese troops as they entered the district and set up a defensive position, which ultimately led to a firefight between the two. The Japanese troops felt strongly that their involvement with the Chinese was an act of self-defense. 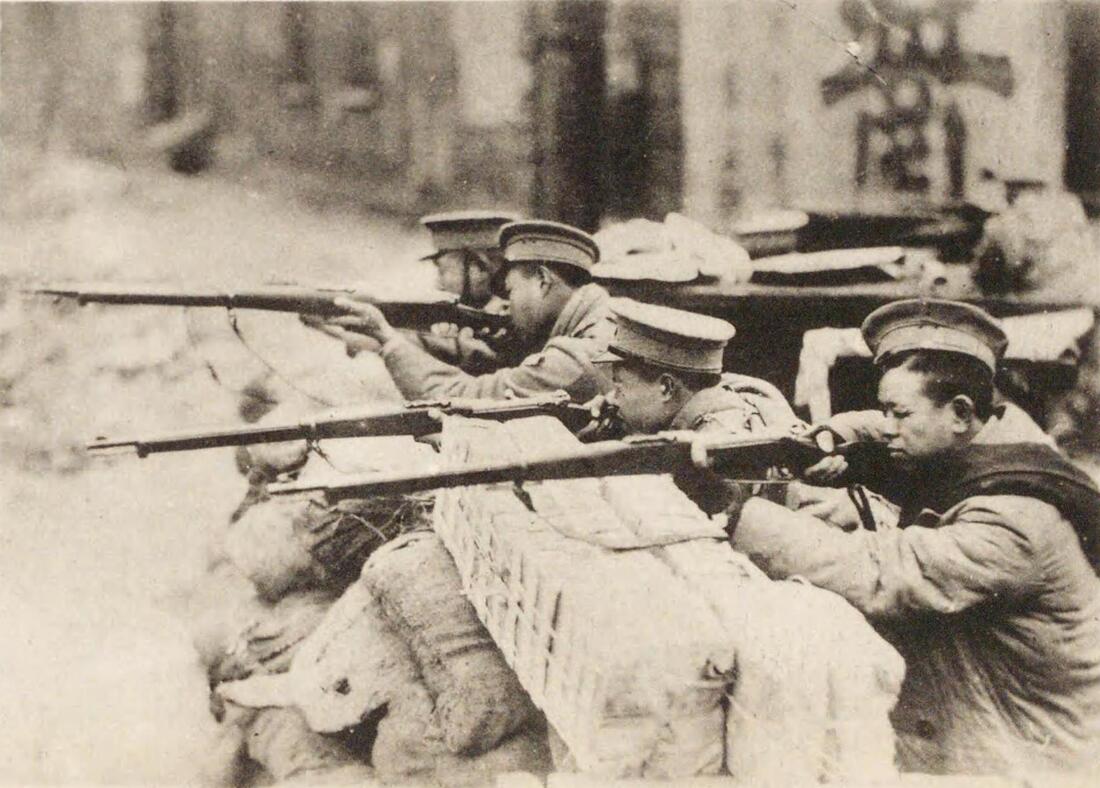 Chinese military police in combat
At the onset of the battle, only 3,000 Japanese troops faced 31,000 Chinese troops of the 19th Route Army. In an attempt to level the playing field, the Japanese Navy dispatched an aircraft carrier to launch an aerial assault against the Chinese positions in the Chapei district without endangering their Japanese nationals. The Japanese naval air force took the most effective measures. First, reconnaissance planes were sent to mark targets in advance of the bombers. Secondly, to ensure the accuracy of their bombing and guarantee that there would be no accidental bombing on the Japanese positions, the Japanese flew as close to the ground as permitted. Finally, targets that were marked for the most effectiveness included Chinese military positions, supply trains, and a mass gathering of Chinese troops, which seemed to be a possible position for an attack. Unfortunately, because the planes flew at a low altitude, they were vulnerable to ground fire. Following the bombing, a truce was proposed and established to provide a neutral zone in the Chapei district where peaceful Shanghai residents could be evacuated to avoid the battle. During the truce, however, the Chinese military attempted to reinforce their position which the Japanese felt was a violation of the truce. In response to the Chinese military build-up, the Japanese naval party called for reinforcements of their own, which recommenced the fighting in February. 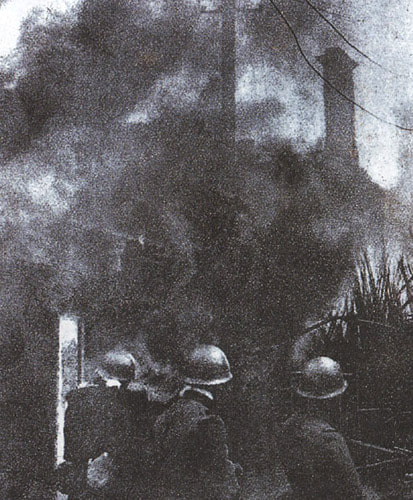 Japanese troops burning residential districts
At midnight on the 22nd, the Chinese launched a series of counterattacks under artillery support, but every single one was repelled. By the third day of fighting, the Japanese 9th Division had begun to move against Miaohang to the left of the Kiangwan district. Like the Chinese positions at Kiangwan and Woosung, Miaohung also had a strong, organized defensive position with well-prepared defenses. To create an opening in the Chinese lines, on the night of the 21st to 22nd, the Japanese dispatched engineers and explosive squads to cut the wire emplacements under cover of darkness and smoke screens. Sergeant Umada gathered three parties of three men to be led by himself to set explosives and use wire cutters to exploit the Chinese defenses. Each party sent either was killed, disabled, or driven back due to heavy firing from the Chinese positions. After his entire group was incapacitated, Sergeant Umada ran into the lines lobbing hand grenades to cause confusion, which allowed him to cut the wire emplacements. That deed allowed Japanese troops to exploit the gap and capture that sector of Miaohang.