The End of Prince Konoe

In 1931, he became Vice President of both the House of Peers and the Privy Council. The Privy Council was an advisory council to the Emperor. Their main functions were to advise on proposed amendments to Japan’s Constitution, proposed amendments to the 1889 Imperial Household Law, matters of constitutional interpretation, proposed laws and ordinances, proclamations of martial law or declaration of war, treaties and other international agreements, matters concerning the succession to the throne, declarations of a regency under the Imperial Household Law, and all matters submitted by the emperor generally by the advice of the cabinet. In 1933, Konoe became the President of the House of Peers, a position once held by his father, Konoe Atsumaro. 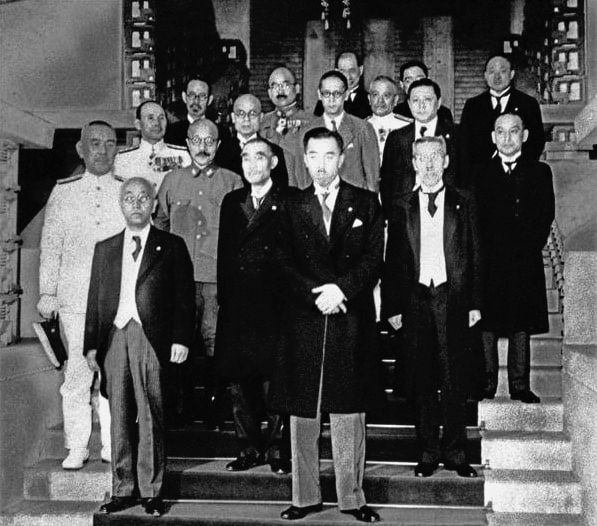 Prince Fumimaro Konoe The 3rd Cabinet.
During this time period, Japan was beginning to occupy Manchuria, forming Manchukuo in China. Following the Manchuria Incident, when Japan began its occupation in China, the amicable Japanese-American relationship became impaired. Konoe was then sent to the United States for a good-will tour where he met with many American leaders, including the President and Colonel House.
On February 26th, 1936, a group of young Imperial Japanese Army officers attempted a coup d’etat of the Empire of Japan, also known as the Ni-Ni Roku Jiken. Their goal was to purge the government and military leadership of their factional rivals and ideological opponents. The rebels successfully murdered a couple of leading officials and occupied the center of Tokyo. However, they failed to assassinate Prime Minister Keisuke Okada or secure control of the Imperial Palace. Following this coup, Konoe was offered the premiership for the first time, but he refused, giving ill-health as the reason. Similar to Emperor Hirohito, Prince Konoe, using ill-health as an excuse whenever he was faced with a difficult situation such as too much military pressure, took to his bed and locked the door. The difficult situations were usually resolved when he returned from his sick leave. It had been asserted that he spent one-half of his political days in bed, and many believed he used his frail health as a political weapon. Some people suggested that the basis of his ill health resulted from the deprivation and exhaustion he suffered in the 1923 earthquake when he contracted pleurisy while searching for friends among the ruins.

On August 17th, 1945, Konoe was named Vice Premier and Minister without Portfolio in the cabinet of Prince Higashi-Kuni Naruhiko. On September 14th, Konoe visited General MacArthur’s headquarters at Yokohama for an unannounced purpose. In an interview with American correspondents on September 13th, 1945, Konoe asserted that he had received the surrender news with “mixed emotions.” He said that he had tried to avert war with China and that the militarists started the Peking Incident without government knowledge. He also said that he could have averted war with America if the militarists had let him. He added that neither he nor the Japanese people knew of the Pearl Harbor plans. In an earlier interview, Konoe had asserted that the military was responsible for the breakdown of the proposed meeting with President Roosevelt in the summer of 1941. Konoe added, “The Emperor and I, and most of the cabinet were for acceptance of the American terms that we withdraw from China, but Tojo, with the backing of the military, violently opposed, I had no choice but to withdraw.” On September 13th, he also stated that he had taken General Tojo Hideki into his government in 1940 because he had been powerless to oppose Field Marshal Hata Shunroku, who had picked Tojo. He blamed the clash of authority between the military and civil government as the basis for the Japanese government’s international reputation as a lie. Konoye also explained that he founded the Imperial Rule Assistance Association in 1940 to give the civil government an instrument to control the military “through the united support of the people” and not to impose a Nazi or Fascist government on the nation. 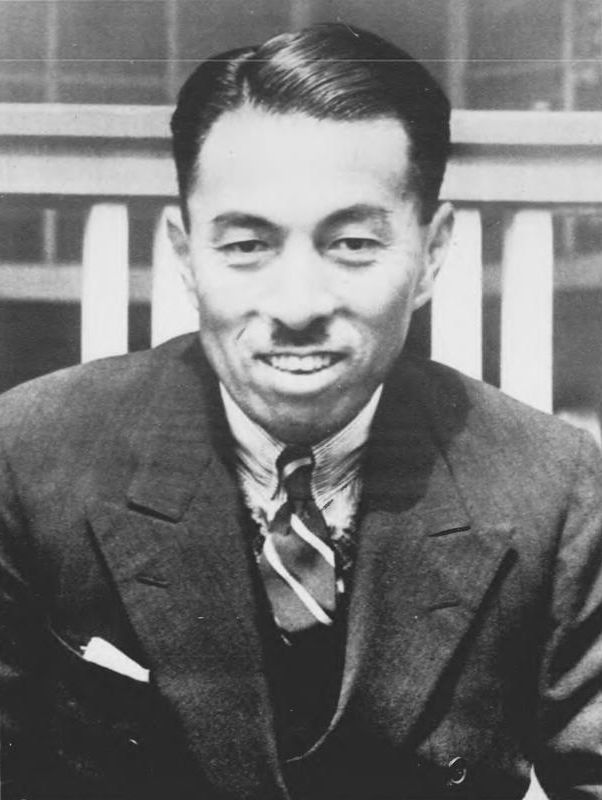 Fumimaro Konoe  in April 1939
However, he added, it did not work. In the end, the militarists took hold of the idea and used it for their own purposes. In an interview on September 14th, 1945, Konoe declared that during the past three years, he had been followed, dogged, and threatened by the Kempeitai, the secret military police. In the same interview, he asserted that he and Generalissimo Chiang Kai-shek probably could have reached an agreement. However, when he was dispatched as personal emissary to the Chinese leader, the Japanese military physically grabbed him as he boarded a ship at Kobe. ​ An article in the Washington Post of September 9th, 1945, stated that Japanese intellectuals, who opposed the warlords’ schemes, are preparing their own list of war criminals. Two close supporters of Prince Higashi-Kuni said that Prince Konoe should be on the list, too.
However, after the surrender, General MacArthur wanted Prince Konoe to come forward and lead a revision of the constitution and other reform, as well as starting a new political party. Konoe agreed to form a committee to revise the constitution. After the Americans occupied Japan, Konoe refused to collaborate with U.S. Army officer Bonner Fellers in “Operation Blacklist” to exonerate Hirohito and the imperial family of criminal responsibility. In December 1945, Konoe consumed potassium cyanide and committed suicide. A week before he committed suicide, he wrote this memoir.​