French Conquest of the Mekong Delta

The Great Famine of 1944-1945 took the lives of approximately one million people, about eight percent of Vietnam’s population at the time. Though the famine was directly ignited by a series of typhoons that destroyed an already weak harvest, there are two different narratives that run through the history of the famine. One focuses on the intrusion of colonial powers into Vietnam and their attempts to control Vietnam’s land and water, while the other focuses on the resistance of the Vietnamese people.
​
The Great Famine of 1944-1945 cannot be separated from the context of French and Japanese colonialism. A thorough understanding of the French colonial project in Vietnam is necessary to understand the famine. By the year 1944, the institution of French Indochina had already existed for over half a century. It was through the south that the French first gained power in Vietnam, through the court of the Nguyen emperors. The French had been traveling to Vietnam since the seventeenth century, for the purposes of religious and colonial expansion. Military involvement began when a small number of French troops unofficially supported the first Nguyen emperor, Gia Long, during his bid for the throne. French advisors remained present in the Nguyen court as it ruled Vietnam, and during the reign of Napoleon III, French ships began to shell central and southern cities such as Da Nang. In 1859, the French successfully took the southern city of Saigon, overturned the Nguyen court’s export ban, and exported fifty-seven thousand tons of rice from the southern region known to them as Cochinchina.
The French prioritized the growth of agriculture in the Mekong Delta, and commenced land reclamation throughout the region. In addition to constructing irrigation systems and canals, the French colonial government sold vast tracts of land to French colons (colonists) and Vietnamese dignitaries, altering the spectrum of land ownership throughout the region. Society grew more polarized, to the point where 72% of the total population owned no land, and only 2% of the total population owned approximately half of the land in 1930. On large land holdings, rice was grown using a sharecropping system, while the few remaining small landowners farmed their own lands. The standard of living of tenants remained low, even as French Cochinchina exported as much as one million tons of rice every year.

The History of the French Conquest of the Red River Delta

The French turned their attention to the northern part of Vietnam, known to them as Tonkin, in the 1870s. French troops initially conquered Hanoi in
1873, and returned to conquer the city in 1882 entirely.
While Cochinchina was considered a colony under the French, Tonkin was initially labeled as a “protectorate,” meaning that the region was still nominally ruled by the Nguyen court at Hue until 1887. After that, however, the region was effectively ruled by a French resident, who could demand an audience with the emperor.
Agriculture was not the primary priority of the French in Tonkin, who aimed to gain access to southern China and Tonkin’s coal and mineral supplies during their first invasion. However, this did not stop the French from attempting to develop a plantation economy in Tonkin, much like the one that they had developed in Cochinchina. However, by the time the French arrived in Tonkin, land in the arable Red River Delta was already greatly parceled.
The Red River Delta flows from the mountains of Yunnan, China, into the Gulf of Tonkin in northern Vietnam. The drastic elevation change between the river’s source and its delta makes for a fast-flowing, rapidly changing river. These changes only grew more dramatic in the late seventeenth century, when mining began in areas near the river’s source. The sediment stripping from settled mining regions turned the river red from the sediment, leading to the river’s modern name.
The Red River’s high sediment content was deposited in its delta, leading to a constantly changing landscape. The delta’s landscape has been regularly growing for four thousand years, opening more land for human settlement in the western delta. However, the modern waterways of the delta were only established in the past three hundred years, emphasizing the dynamic nature of the landscape. Due to the uneven deposition of sediments and the already present soil varieties of the region, the delta consists of distinct regions. The central and lower delta, where the Red River deposited most of its sediments, is richer in nutrients.
Due to its more northern latitude, northern Vietnam experiences more distinct seasons than its southern counterpart. The wet season lasts from April to October, while the dry season lasts from November to March. However, there is great regional variation within this pattern, and many regions, such as Hanoi, can distinguish four seasons. The delta also generally receives a preliminary rainy period during midwinter due to its northern latitude. The long rainy season, combined with the risk of typhoons during the same period and the fast flow of the Red River, contributes to a high risk of flooding in the Red River Delta. According to the historical record, flood years are often followed by drought years. The flood and drought cycle endanger crops grown in the delta, placing the population of the region at risk of famine. 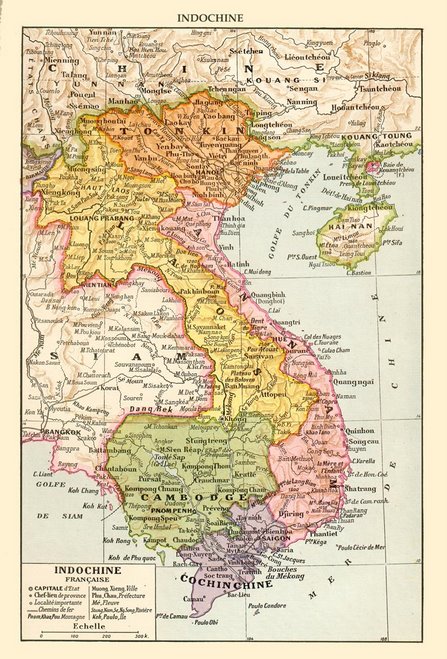 Map of French Indochina from the colonial period showing its six subdivisions: Tonkin, Annam, Cochinchine, Cambodge, Laos and Kwangchow Wan. Source: Wikipedia.
Although the land on and near the delta was given to French colons, the sharecropping system utilized in Cochinchina did not work in Tonkin. This was because Vietnamese farmers in Tonkin lacked the motivation to become sharecroppers, and those who found their land under French control remained non-compliant in resistance. Therefore, land in Tonkin remained highly parceled under the French, and the majority of its rural inhabitants were subsistence farmers who relied on smaller plots of land for food.
In addition to attempting to change the land parcelization of Tonkin, French authorities found the Nguyen administration’s hydraulic management lacking. As mentioned before, the system of dikes and canals in Tonkin represented centuries’ worth of attempts to control the Red River’s frequent floods. The condition of the dikes was especially crucial to preventing floods that would destroy harvests and devastate millions of Vietnamese farmers. The French began to dike the Red River Delta in 1923. While both Vietnamese and French constructed dikes were constantly widened and raised, the materials that were used left dikes vulnerable to erosion. They could break or be breached if floodwaters rose high enough or flowed fast enough. A similar situation occurred in the case of irrigation canals, crucial for alleviating famine caused by droughts. Periodical famines caused by the flood and drought cycle led the French to consider an unprecedented delta-wide management program.
As in Tonkin, central Vietnam, known to the French as Annam, was designated as a protectorate. It was the last of the three regions of Vietnam to be incorporated fully into the French empire, remaining a rump state until resistance from royalist forces encouraged French forces to conquer the region fully. Though Annam and Tonkin were considered parts of French Indochina, they were nominally ruled by the Nguyen court from Hue, although real power lay in the hands of the French resident. This meant that the civil service in the protectorates remained in the hands of the Confucian scholar-officials. Vietnamese law remained in place, and the typical structures of Vietnamese rural life, such as the village, remained intact. The preservation of traditional social networks would prove crucial in the next decades, as Vietnamese leaders relied on community organizations to resist the colonial regime.