Tensions of Cold War A few months after giving the BW scientists official freedom, the U.S. dug deeper into the Soviet activity in the field. It was stated that it was no secret that the Soviet Union had indeed practiced offensive BW during WWII, but also after it. Reports of post-war usage began to surface, but similarly as with all of the “unreliable” sources the U.S. had received information about the Japanese, American intelligence operations
dismissed most of those Soviet activity witnesses as “absolutely unqualified” people. It appears, that once again, the U.S. practiced selective choice of sources of offensive Soviet BW activities towards the Chinese. However, it was stated that there is absolutely every reason to believe that due to the Soviet Union’s past, they were studying the topic intensively. 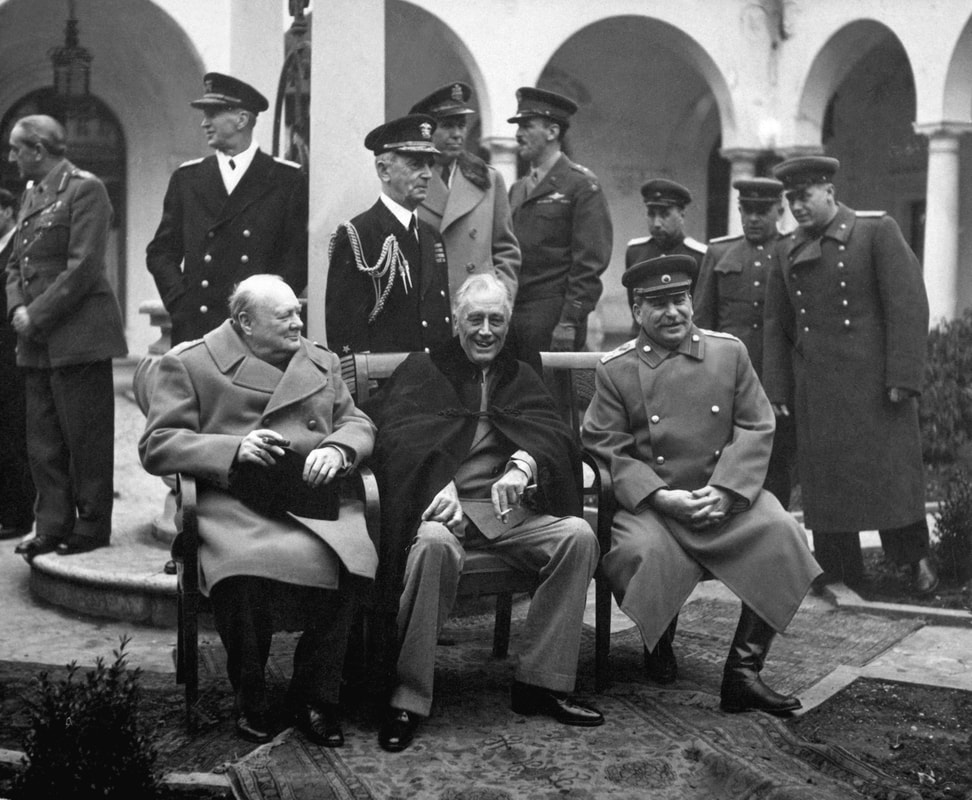 The "Big Three" at the Yalta Conference: Winston Churchill, Franklin D. Roosevelt and Joseph Stalin, 1945
Yalta Conference foreshadows the Cold War
Maintaining a continuing level of distrust regarding communism and the Soviets, the U.S. began to take measures of national security, involving the
“protection” and safety of other nations as well. In the process, Japan indeed proved to be a very good companion on the Pacific side of the world. Prolonging his anti-communist takeover of Japan, General MacArthur continued to work in Japan to secure its democratic and positive mindset toward the U.S. Hunting down communists and building better economic frames mainly generated good results, as Japan followed the U.S.
The continuation of the Cold War appeared naturally to empower the U.S. which included follow up cooperation of the Japanese and American BW scientists. The promises of immunity, moreover, have even more multiple benefits for the Japanese that they could have not imagined. Not only were
they free to walk away from the painful human experiments conducted on innocent people during the war, but also their expertise was highly appreciated as professional scientific knowledge. Despite denying the cooperation, it seems as at least some of the Japanese BW experts visited the U.S. and were rumoured to have observed and participated in several BW tests. One of those included the former Unit 731 scientist, Mr. Naito, who somehow was not at first “identified” by the Occupation forces to have been the person who tried to obtain yellow fever from the U.S., and who was able to maintain a successful medical career after the Tokyo War Crimes Trial.

Unlike Germany, Japan was given the tools to disregard its history of WW2 and as such, the immunity grant affected the cultural and educational atmosphere of Japan’s society. Shedding a bright light on the inhumane experiments carried out by the Japanese BW criminals, a strong sense of judgement could have been encouraged among global citizens.