Aftermath of Battle for Shanghai

One of the most substantial consequences of the battle was the effect on civilians, particularly the population movement. During the battle, Shanghai was bombed continuously and shelled by Chinese and Japanese bombers, artillery, and naval warships. As a result, the Chinese population was forced to flee from their homes into the International Settlement and French Concession for safety and protection from the war. While the French Concession authorities initially refused to accept refugees, the massive influx of fleeing civilians were able to escape and hide in the settlement. Many authorities and French citizens allowed fleeing them access to the concession out of humanitarian concern. In late October 1937, French authorities relaxed restrictions on refugee entry. Over a million civilians became refugees and fled to the international territories. From there, by December 1937, 375,000 had been evacuated from Shanghai. Because of the lack of resources, almost 700,000 refugees were forced to rely on friends, family, and outside support for housing, food, and medical assistance. There were over 180,000 refugees per square mile, which led to rationing food, and sharing beds, clothes, and income. While many refugees had familial support, others were not so fortunate and found themselves in dire straits—homeless and living on the streets, in abandoned buildings or on vacant lots. Theatres became a new living site for many refugees as they squeezed together. Relief organizations were formed to provide financial, medical, and evacuation assistance. The Red Cross funded refugee assistance until early 1938 when they dropped their support and transferred their tasks to local committees. These committees included the Shanghai International Relief Committee, the Federal of Shanghai Charity Organization, and the Refugees Relief Committee. The Shanghai International Red Cross was involved in collecting funds and supplies for refugees through foreign sources. These organizations assisted in creating refugee camps. The highest number of camps established was in December 1938, with 158 camps housing 95,000 refugees. 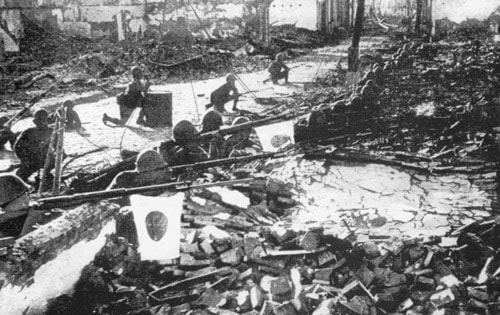 Japanese troops in the ruins of Shanghai
The largest camp was the Jacquinot Safety Zone, operating on November 9, 1938, which housed approximately 250,000 refugees throughout the Japanese occupation. Due to the desperate need for medical, housing, and food funding, authorities within the International Settlement dismantled poorly equipped camps and used the resources to support well-equipped ones. Medical efforts focused on providing more vaccinations to help prevent diseases, such as cholera and smallpox. Although the refugees that lived there were mostly family, many individuals were without family members, including children. In August 1938, there were up to 1500 orphans in the International Settlement, many of whom were either separated from their families or had been deserted. Nine camps devoted themselves to building orphanages and nurseries for abandoned or separated children and babies.
While the majority of refugees were Chinese natives, there was a large number of non-Chinese refugees in Shanghai. In 1938, Jewish refugees from Germany and Central Europe escaped religious persecution by fleeing to Shanghai. No strange place for them, there were already around 50,000 Russian Jews who escaped persecution from the Bolshevik Revolution in 1917. The Russian Jews accepted and aided the new Jewish refugees in settling into the International Settlement, mostly in the Hongkew district which had been destroyed by intense bombing and shelling. Upon arriving in Shanghai, the refugees established temporary refugee camps in Hongkew and used money to rebuild the districts and establish hospitals and kitchens. While the Jewish refugees no longer faced religious or racial prejudice, they experienced economic struggles and poor living standards. They gained no support from the Japanese and the Chinese Government viewed them as enemy nationals. This meant that they could not engage in trade or professions, exacerbating the inability to obtain help with food and medical assistance. 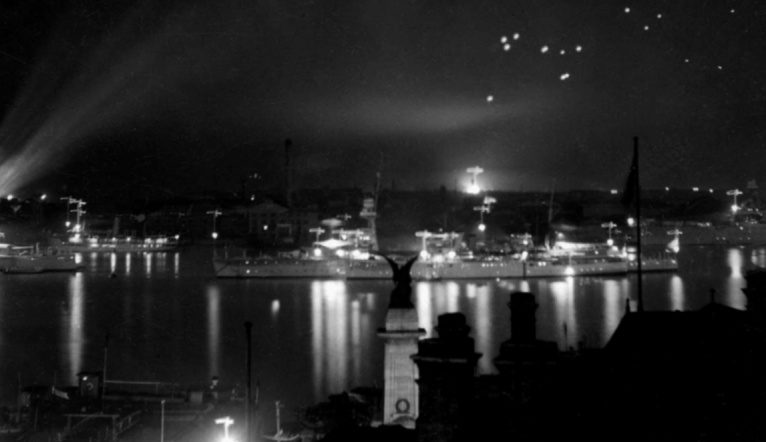 Japanese warships repel a Chinese air raid in Shanghai harbor. 1937
In 1939, the American Jewish Joint Distribution Committee (JDC) and the United Nations Relief and Rehabilitation Administration (UNRRA) began funding the Jewish community which relied on the relief funds provided by the two organizations. They had to build kitchens, housing, and medical and educational facilities. The kitchens had to prepare food to feed 12,000 refugees, and obtaining supplies from outside sources without aid from the Japanese or Chinese government proved a daunting challenge. The JDC sent representatives to speak with the Japanese about allowing aid in the form of food and money to be brought to the Jewish community. The Japanese agreed to the requests if the Jewish community would repay the loans after the war.38 The JDC worked with the community and with UNRRA for aid and support. In 1942, the JDC began sending clothes and medicine into the Hongkew ghettos and a system was created with local committees to build a hospital with European nurses and doctors that provided the community with emergency relief.

Atrocities on the Road to Nanking

While the anti-Chinese, nationalistic, and aggressive attitudes taught Japanese to hate Chinese and normalized treating them brutally, it was the battle of Shanghai that arguably prompted the acts of brutality and atrocities on the road to Nanking and in Nanking itself. The Japanese had expected to clear Shanghai in a few days and be in Nanking in three months. Instead, the elite Chinese divisions fought the Japanese to a standstill and inflicted heavy casualties on them. The Chinese military destroyed the Japanese erroneous perception of military superiority and Chinese inferiority. As a result, the Japanese soldiers, who lost many friends to the Chinese, developed a bitter feeling of resentment. In the case of the 100-kill contest and the Rape of Nanking, Japanese soldiers, with their anti-Chinese sentiment and resentment of the Chinese damage inflicted on the Japanese soldiers, retaliated with abhorrent results. While proving the strength behind the Chinese military and shattering the belief of Japanese superiority, the battle of Shanghai led to one of the most horrific tragedies in history. 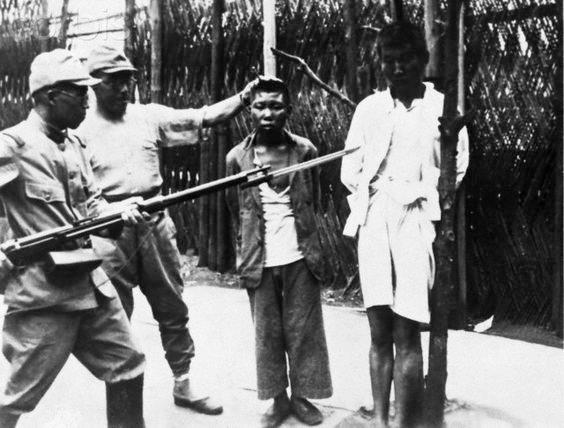 Japanese troops atrocities
In an interview with a Japanese soldier, Yasutada Nanba, a Japanese veteran of the Sino-Japanese, discussed the brutality and atrocities he was ordered to inflict on the Chinese. Yasutada described an incident on December 1, 1943, when his officer ordered a village be burned down. After sacking and pillaging the village and taking what they wanted, Yasutada and his fellow soldiers trapped villagers in their homes and set the buildings on fire. Like many Japanese, Yasutada was influenced by his training in ​Japan. Koichi Okawara’s interview reflects more deeply this mindset and its effect on Japanese personnel. He described his experience under military training and how, during killing training, he explicitly practiced killing Chinese. On November 24, 1943, wanting to occupy a farmhouse, he killed the farmer. Like his superiors who trained him, he ordered his subordinates to do the same to the Chinese villages. Both Yasutada and Koichi, along with many other Japanese veterans, acknowledged their training, but also the part their upbringing played in introducing nationalist and patriotic ideas that intertwined with racism and aggression. While they understood they could never reconcile their actions, it was important to the Japanese veterans to raise awareness of the truth and criticize the government for their part in both encouraging and promoting their actions and also attempting to cover them up.