Japanese Imperialism Through the Lens of French Indochina

Throughout this publication, we will be using the term Indochina (originally Indo-China) to refer to the French and the eventual Japanese colony. The name was first used by Danish-French geographer Conrad Malte-Brun and the Scottish linguist John Leyden and referred to the lands within the cultural influence of India and China, which included the present-day areas of Myanmar, Thailand, Laos, Cambodia, Vietnam, and peninsular Malaysia.[The term was later adopted by the French, comprising present-day Vietnam, Cambodia, and Laos.
Vietnam has a long history of fighting for independence from China. As early as AD 40, there were attempts to liberate Vietnam from the Han Chinese. In 1802, the final Vietnamese dynasty, the Nguyen, unified the country through French support. However, from the 1850s, France looked to extend its sphere of influence to compete against other imperial powers such as Great Britain. The opportunity arrived when tensions surrounding the Roman Catholic community culminated in the execution of numerous Vietnamese Christians and European missionaries. In 1858, the French used Christian persecution as a pretext to invade, and by 1884, they had seized the whole nation. They split the territory into three areas, renaming them Tonkin (north), Annam (central), and Cochinchina (south). Witnessing the situation in Vietnam, the king of Cambodia, wanting to leave Siamese control, requested the French to become a protectorate (accepted in 1867). Soon after, the king of Luang Prabang (the Laos capital) followed suit. 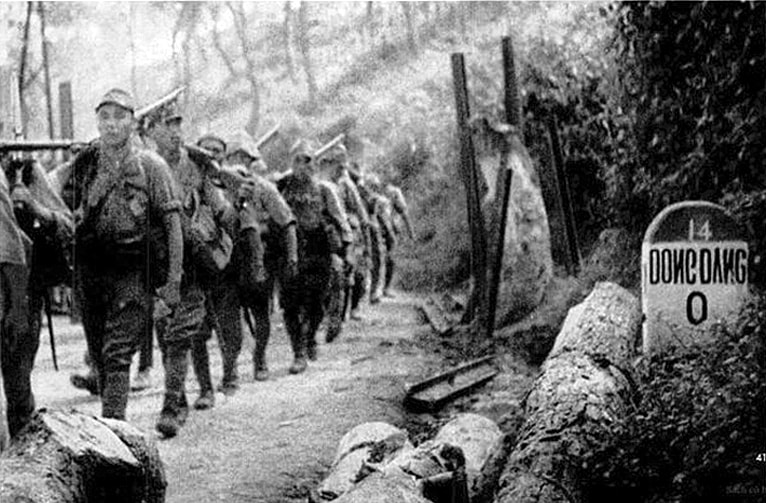 Soldiers of the 5th division, Imperial Japanese Army, are invading French-Indochina at Đồng Đăng, 1940. Source Wikipedia
Tensions with Siam grew as the French expanded, culminating in the Franco-Siamese War (1893). Siam was forced to recognize French control over the eastern side of the Mekong River, and France officially established the protectorate of Laos. Thus, France established the colony of French Indochina. The resource-rich territory, namely rice, coal, and rubber, made it very valuable for the French. Thus, when the Japanese became desperate for raw materials during the prolonged war in China, they also looked to Indochina.

France’s surrender to the Nazis created the opportunity for the Japanese to advance into French Indochina. The war in China was lasting much longer than Japan had anticipated. Chiang’s army was aggressively resisting Japanese forces, due in large part to Western aid. Japan’s reserves were rapidly diminishing, and they became heavily reliant on trade, especially with the U.S. Despite the U.S.’s non-interventionist stance, the atrocities committed by the Japanese in China led to the government enacting “moral embargoes” on war resources entering Japan, such as aircraft material. This severely damaged Japan’s economy and the military became desperate for raw materials. Thus, Indochina was the perfect target for a Japanese invasion. The land was rich in oil, rubber, and rice, which were essential for warfare. Northern Indochina, in addition, was used as a supply route for nearly 50 percent of the Chinese Nationalist Army’s resources. If Japan managed to block and seize it, the Imperial Army would gain a significant advantage. Thus, the fall of France created the “golden opportunity” for a nanshin execution. An invasion would improve Japan’s economic circumstance, possibly end the war with China, and increase their sphere of influence. Only the U.S. and Britain stood in the way of these ambitions. 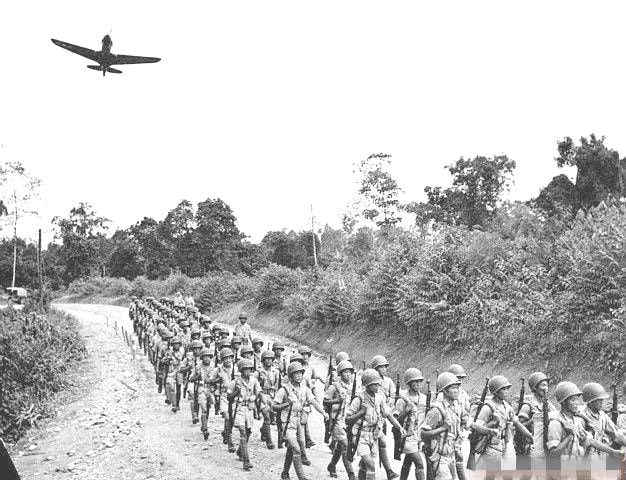 Japan Troops in French-Indochina. Source Wikipedia
In June 1940, Japan opened negotiations with the new Vichy government. Japan demanded the cessation of all war materials through Indochina and an embargo on imports into China. Vichy France agreed to the Japanese requests in return for the territorial integrity of Indochina. The Japanese were hesitant to accept such a proposal. The French grew suspicious of Japanese motivations sparking dissonance in future negotiations. Notably, the Vichy government rejected Japan’s demand to station forces in Indochina. They feared the possibility of Japanese occupation and the harm to relations with the U.S. and Britain. Despite this setback, Japan maintained a diplomatic attitude. However, members of the Army pushed for an invasion.
After further negotiations, Japan accepted France’s request to respect the territorial integrity of Indochina in exchange for the passage and stationing of Japanese troops in Indochina. The deadline for negotiating specifics, such as the number of units and locations, was September 22, and the Army was ordered to cross the border if negotiations expired. Japan and France concluded talks several hours before the deadline, and sources confirm that the Army received new commands an hour beforehand. It stated Japan would only station troops arriving by sea. Yet the Army, acting on their own accord, crossed the border, sparking a battle between Japanese and French forces. After a few days, the Japanese Army eventually obeyed the commands of the government and withdrew their troops. The government dismissed Army officers responsible for the incident, but the damage was done. Americans were shocked by the incident, fearing a Japanese invasion of the Philippines. The U.S. government added iron and steel scrap to the Export Control Act, deepening Japan’s economic problems. Additionally, the incident led to great animosity between the Japanese Southern China Army and the Japanese China Fleet (Navy). Despite the feeling of betrayal of the French, negotiations resumed smoothly and concluded after three months.