It is crucial to analyze Formosa’s geography and natives to understand the importance of Formosa and its native population under foreign influences. Formosa is an island of approximately 15,000 sq. miles, with forested mountain ranges, lowlands, plateaus, and ravines, surrounded by coral reefs. Formosa is connected with the Fujian province at roughly 2000 meters underwater. Volcanoes and igneous rocks rose 1500 feet above sea level, and corals were found on mountain peaks 2000 feet above sea level. Many Formosan months and seasons have extreme weather, particularly in the summer months. June, July, and August often become extremely hot, with droughts and temperatures as high as a hundred degrees. Torrential typhoons and tropical storms are very frequent in August and September. During the winter months of December, January, and February, rain lasts for days or weeks. Mild, tropical weather usually occurs during spring months, as well as in October and November. 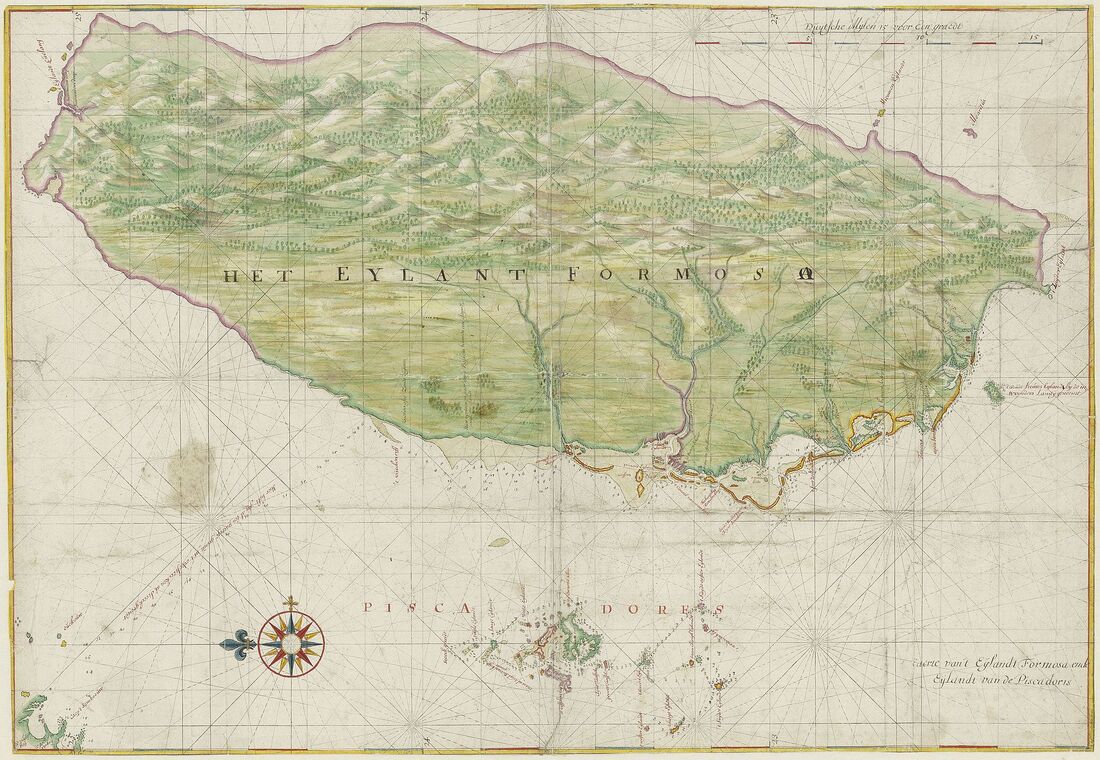 Detailed old illustrated map of Taiwan
Similar to the treatment of other native groups under colonial rule, the Chinese treated Formosan natives harshly. During their settlement, the Chinese bartered with the natives, yet forced natives off their own lands into areas inhabited by other tribes. While exploring the island and building trade centers, the Chinese wanted to provide for their community in Formosa. This community would be built on towns and villages, which tended to be safer and more pleasant to the Chinese than the countryside. These towns also created an expanded work environment for Chinese workers such as blacksmiths, silversmiths, jewelers, weavers, and tailors. In Formosa, farmers became the most important and esteemed workers due to their importance in the Chinese-Formosan economy. They produced goods essential to all domestic and foreign consumers and traders. The most cultivated resource in Formosa was rice, followed by tea, which became the most profitable products. Tea, particularly, became in high demand due to European and American influence and its spread among Pacific Asian nations. Other products cultivated in farms included sugar cane, sweet potatoes, onions, and other consumable vegetation. Along with workers, traders, and merchants, Presbyterian missionary George Mackay recorded that at least 3 million Chinese settled in Formosa by the end of the 19th century. They not only built towns, they worked on farms and spread their religion to convert the native population.

Timeline
Prehistory                             to 1624
Dutch Formosa                 1624-1662
Spanish Formosa              1626-1642
Kingdom of Tungning     1661-1683
Qing rule                             1683-1895
Japanese rule                     1895-1945
Republic of China rule     1945-present
The first accounts of Formosa were delineated by an early 6th-century Chinese expedition. Chinese scholars believed that the natives were part of the Loochoo people from the Loochoo Islands, now known as the Ryukyu Islands. As a result, the aboriginals were known by Chinese historians as Lonkius. During a second Chinese expedition, it was discovered that Malayan natives also traveled and arrived in Formosa between the two teams. Little documentation followed the second expedition until the beginning of the Ming Dynasty. The Ming Dynasty reported their historical discoveries in a series of annals known as the Ming Shilu, which became the most significant historical record of the Ming Dynasty. During the rise of the Ming Dynasty, the Chinese launched a series of expeditions under Admiral Yang-Tsing to study Formosa and the Loochoo people. These expeditions discovered that Formosan natives were distinct from the Loochoo and seen as foreigners by the Loochoo people. As such, more teams were sent to Formosa to examine further and understand them, but it would not be known as Formosa until the 16th century. In 1430, a eunuch officer of the Ming Court, Wan-so-ho, landed on Formosa while avoiding a harsh storm. Unaware of the island nation at the time, he discovered that the natives tended to him and regarded him favorably. When Wan-so-ho reported his findings to the emperor, he brought back a multitude of herbs discovered to be very important medicinal supplements. Following further expeditions, Formosans had many encounters with pirates and traders off the coast, notably Chinese and Japanese, because of the importance and value of the island chain. Japanese pirates began raiding Chinese coastal towns and villages primarily along the Fujian coast. Pirates dealt so much damage to the coastal communities that the Ming emperor was forced to limit trading and connections with neighboring island ports. During the late 16th century, after numerous expeditions and findings from traders and explorers, China and Japan began to view the commercial and political importance of Formosa. While the two countries' relationship had grown tense due to the raids, Formosa became a neutral ground with ports that allowed all nations to trade and distribute goods, mediated without distribution or imposition of taxes. Formosa also started attracting merchants to engage with the movement of the rising profits from its trading ports. While most merchants conducted business only with traders of their own countries, Japan granted specific clearances for merchants from certain Japanese towns such as Nagasaki, Kyoto, and Sakai to trade with other countries. Traders eventually made Tainan, the Formosan capital, the trading center, and a primary port for Japan, China, Luzon, and Siam.

1960s, Taipei Taiwan
Due to Formosan trade revitalization, the Japanese sent expeditions to Taiwan to re-engage trade negotiations with the Chinese and Europeans. Taiwan became popular again as it had been during the Dutch and early Chinese periods, but that also meant the return of pirates and natives who raided and looted incoming ships and beached vessels unprotected by port defenses. Although prosperous, the 1870s marked the beginning of the end of the lengthy Qing rule over Formosa. The 19th century saw the arrival of French expeditions into Asia, particularly South-East Asia, as other European countries colonized countries in the Pacific Asia region. The French sought to expand their empires and scouted for lands from which to profit. The natural resources and territory of Southeast Asia appealed to the French, but the Chinese had already partly invested in these areas. The French saw the Chinese as an obstacle to their claims, so they invaded Vietnam, Laos, Cambodia, Taiwan, and parts of China in an attempt to stake their claim in Chinese ports.
While the French conquered the renamed French Indochina, now Vietnam, Laos, and Cambodia, they failed to establish permanent positions in either China or Taiwan. The Chinese on Formosa and along the coasts of China repelled the French assaults but exhausted valuable resources and men in the process. As a result, Taiwan, while able to replenish itself slightly, remained vulnerable to being defeated by and forced to secede from the Japanese within a decade.