Understanding of the Tragedy

Although the famine was irrefutably a massive tragedy, very little documentation or accounts of the famine and its casualties exist today, particularly outside of the Vietnamese language. There are no available statistics about the losses that individual provinces or towns suffered, much less any demographic breakdowns. Even having them, though, would never be enough to sufficiently measure the psychological effects that the famine had on survivors or their descendants. As Marr writes, “The sounds of lamentation among starving compatriots, the sight of bodies strewn alongside rural roads and hedges, or encountered each morning on city sidewalks, continued to haunt several generations in northern and north-central Vietnam.” Even without major historical coverage outside of Vietnam until recent years, this event clearly continued to scar the Vietnamese people for decades.
In the nearly eight decades since the famine, though, there have been several attempts to recover and learn as much about the event and its long-term effects. In what Gunn refers to as a “truth-seeking exercise,” Japanese scholar Futura Motoo collaborated with a Vietnamese research team between 1992 and 1995 to conduct a retrospective mortality analysis of the famine through household surveys and interviews conducted in northern Annam and Tonkin. Through their research, they found that economic factors had sharply separated the fate of families, as land-owning peasants tended to mitigate the effects of the famine, while the death rate for landless peasants climbed as high as 53.3 percent. 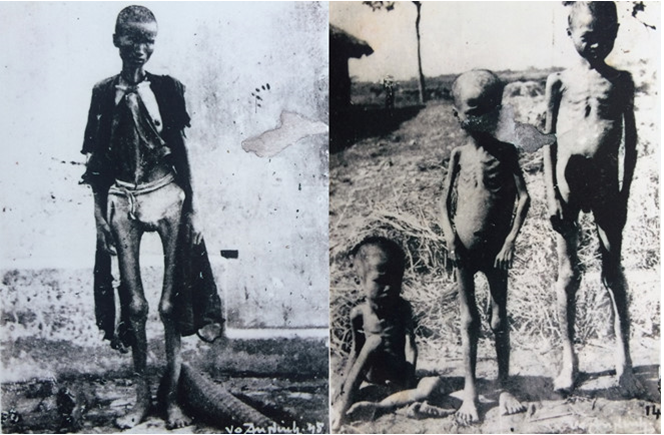 Starving Vietnamese children.
A study of the famine would inevitably call into question assumptions about human morality and behavior. Of course, one could ask how a person could decidedly chain their children up to prevent them from eating or steal clothes off of an expectant mother’s body, but on the other hand, how could the authorities deprive people of enormous stockpiles of grain, and continue to do so as hundreds of thousands died before their eyes? How could urbanites watch rural villagers pour into the city and turn their noses up, rather than provide whatever aid they could?
There is an important but understated reason to ask these questions and study atrocities such as this famine, particularly outside of the Western world. Westernized education tends to teach a very unilateral perspective of the Western world in World War II, amplifying the heroic aspects and downplaying the crimes and casualties. However, as these countries, particularly European imperialist powers, nursed their political and militaristic wounds, many nations across Africa and Asia seized the opportunity to build decolonial movements. Weakened European powers, lacking wealth and political clout, could do little to suppress nationalist uprisings happening continents away. This era of mass decolonization tends to be a mere paragraph or so in Western history textbooks, leaving the majority of the population generally ignorant about the movement. By ignoring the horrific ramifications of imperialism and colonization before and during (and even after) World War II, we lack the understanding of the legacies they left that continue to haunt the victims of such atrocities and their descendants. Such Eurocentric histories also help in creating conditions that prevent future historians, especially those with a Westernized education, from thinking critically about events, and subsequently from ever fully rectifying historical wrongs.