The city’s political, economic, and cultural structure provided a background for understanding the importance of Shanghai to the Japanese military and political leaders. Japan’s interests in Shanghai arose due to its upcoming engagement in foreign investments and settlements. Since the 1920s, Shanghai had been establishing itself as a center for international political, economic, and cultural exchanges. Because of their investment in international trade and settlements for foreigners, Shanghai became more significant as a global geopolitical and economic influence. Foreign presence easily promoted the increased exchange of political, economic, and cultural ideas. As Shanghai became more dependent on foreign imports and exports, industries were established to support the foreign markets. The Shanghai Power Company supplied industries with electricity to help support production. In 1934, Shanghai’s popularity and increased demand for supplies led to the growing need for electricity to increase production. The Shanghai Power Company sold almost 750 million kilowatts of electricity to different industries, the most important one being the cotton industry which constituted 77.8% of the Power Company’s sales between 1930 and 1934. Other industries included flour, rubber, paper, and tobacco. 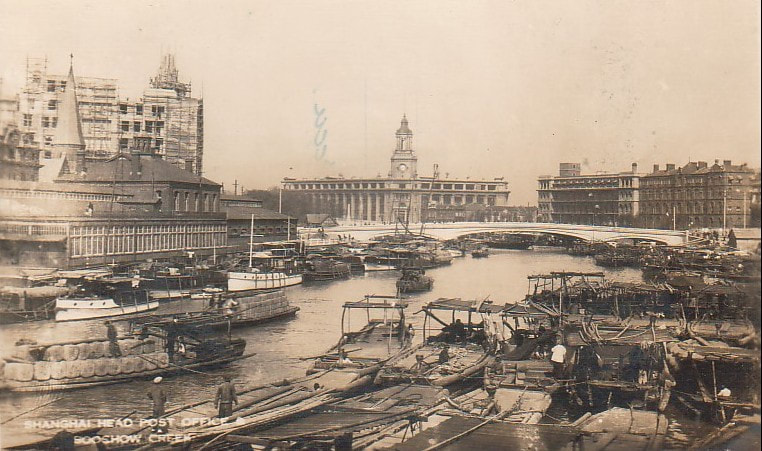 Suzhou Creek around 1920
Shanghai’s success and influence worked two ways. It profited off of foreign traders and companies that, attracted by Shanghai’s influence and success, came there to sell and buy goods. In return, the foreign market profited from their exploits in the city while also spreading news of Shanghai and its global market which benefited the city. Shanghai relied on its foreigners to contribute to its growth. Since the mid-19th century, foreigners had been attracted to the city. In 1843, botanist Robert Fortune described his experience arriving in Shanghai and his amazement at how packed the port was. Fortune’s experience mirrored that of many early foreigners who were amazed at the heavy traffic within the port. Even during its early genesis as an international industrial and trading center, Shanghai had still attracted a large number of companies and industries, including the American trading house Russell and Company and the British foreign trading company Jardine Matheson and Company. The latter became one of the largest foreign trading companies of the 19th century. The emergence of Sino-Japanese hostilities in the early 1930s brought a new threat to Nationalist China and their struggle with the Communist Party. The threat allowed Shanghai to expand its political and economic opportunities, including its involvement in international administration in Shanghai and its foreign trade and industrial development.

During the mid-19th century, Shanghai was split into three main independently governed sections: The International Settlement, the French Concession, and Greater Shanghai. The International Settlement, overseen by the Municipal Council, was an area on the outskirts of Shanghai proper and housed foreigners. The Municipal Council consisted of nine foreign officials, including five British, two Americans, and two Japanese, along with five Chinese officials. The settlement was protected by the Shanghai Volunteer Corps, the settlement’s law enforcement organization funded and supplied by both the British War Office and the American Government. The Shanghai Volunteer Corps was also seen to be militarily mobilized during threats such as the conflicts between the Chinese and Japanese in 1932 and the entrance of Nationalists forces in 1927. Over the years since its establishment in 1843, the foreign population the International Settlement steadily increased, which led to slow growth of the area and its community
The French Concession was established in 1844 when France granted rights to settle a French community into five Chinese communities, including Shanghai, Nanking, Canton, Amoy, and Foochow. While there were Americans and British concessions, they were soon merged with the International Settlement while the French community remained independent. Following the occupation of Shanghai from Nationalists in 1926, the Greater Shanghai municipality and the city government was established. Greater Shanghai was designated as under the jurisdiction of the Nationalist Government and surrounded by foreign municipal areas which were independently administered. By the 1930s, Shanghai’s population totaled 3.5 million. 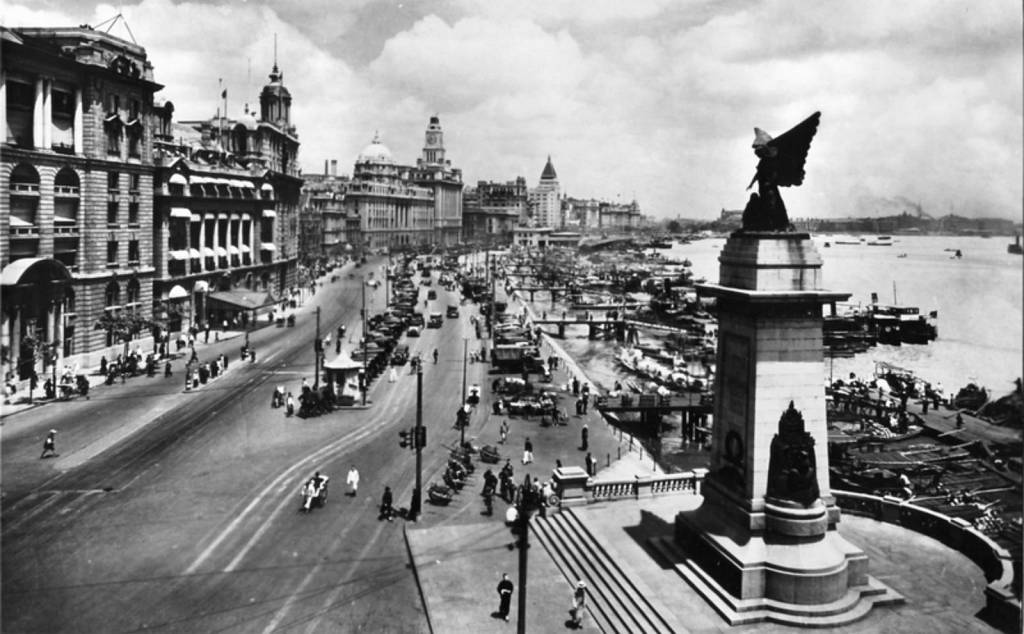 Shanghai 1928
In 1932, the Peace Preservation Corps was established in Shanghai as the police force. Its main objective was to maintain order in neutral areas around Shanghai and parts of Shanghai outside of the International Settlement and French Concession. The Corps initially started with a force of 5,000 but had doubled in size by 1936. Before Japan invaded Nationalist China, Japanese officials studied Shanghai to assess their situation for the purpose of developing their strategy. While the Peace Preservation Corps was meant to be the police force, it was funded and supplied by the Nationalist Army, which resulted in their equipment being the same as that of the regular Chinese troops. Upon any sign of a threat, the Peace Preservation Corps could be mobilized as a defensive military force.
Following the Russo-Japanese War and rapid Japanese industrial and population growth resulting from their victory, the Japanese population on mainland Asia increased, particularly in major international cities such as Shanghai. In order to handle the task of unifying and protecting the Japanese community in Shanghai, the Japanese Ministry of Foreign Affairs passed the Resident Association Act, which helped create the Japanese Resident Association (JRA). The JRA created schools and clubs in order to form a protected close community. The Japanese presence and treatment in Shanghai strengthened the reason for the Japanese military to engage with China, particularly with Shanghai. Shanghai’s presence in Japan’s political and economic growth allowed Japan to witness changes made in and around the city and to examine its future potential in Japanese-held territories in North China, Manchuria, and the Japanese living in Shanghai.
Shanghai was essential to Japan not only because of its political and strategic position but also because of the threat it posed to the Japanese-occupied territories of North China. A vengeful sentiment towards anti-Japanese movements occurred towards the Japanese population in the International Settlement. In 1937, the Kuomintang, threatened by an increase of Japanese military strength in North China, sent more Chinese military forces to Shanghai and areas around Shanghai to build up a defensive force. Following the Marco Polo Bridge Incident, 100,000 Chinese troops from the 36th, 87th, 88th, 27th units and the 33rd Division were stationed. The Chinese force also included artillery units, engineers, and other support troops. Furthermore, the Japanese felt the Chinese Peace Preservation Corps was a military force disguised as a law enforcement organization. With the escalation of Chinese militarization in Shanghai and increasing tensions and conflicts between China and Japan, the Japanese felt their Shanghai population was threatened and, therefore, landed their Naval Landing Party with marines and naval troops to protect the Japanese nationals from potential threats from the Chinese military. Simultaneously, the Japanese government worked to evacuate Japanese nationals from the International Settlement. By August, the Japanese Army advanced in Shanghai to support the marines and beat back the Chinese military.