The Formation of Huk
The Hukbalahap began as a socialist organization composed of a diverse cast of laborers and grassroots activists; peasant farmers, workers’ unions, communist party members, and both urban and rural laborers. The founders and party members hailed from both the Socialist and Philippine Communist Party, and throughout the 1930s, prior to the Japanese occupation, served as active nationalists and revolutionaries who sought an independent communist Philippine state. The leader of the Philippines' first official communist organization, the Worker’s Party, was Crisanto Evangelista. It was not until after the Japanese capture and executions of Evangelista and his head deputy, Abad Santos, that Evangelista’s communist and socialist guerrillas unified in addressing themselves officially as the Hukbalahap in 1942. The name of their resistance branch, Hukbalahap, translates to “people who are against the Japanese” or “the people’s army against the Japanese.
Filipina in Huk
Originally, the Huks only intended to recruit men for their organization. The first women who joined their ranks were family members of its male recruits. As the war progressed, more women—whose family members were involved with the Huk resistance—decided to join voluntarily. Male recruits were usually trained as foot soldiers or officers. Women, on the other hand, were relegated to support roles, such as secretarial, propaganda, or medical-related fieldwork. The vast majority of the Huk movement’s female medical personnel worked as nurses.
War gave Huk women the opportunity to take on important roles that once were deemed suitable only for men. Like most underground resistance militaries, the Huks were constantly short of resources, meaning they had to rely a great deal on Filipina labor to make up the difference. Large female support staff meant that more Filipino male guerrillas were available to serve in combat roles. Filipinas supported the underground resistance not only by providing medical care for male combatants, but, perhaps more importantly, by maintaining lines of communication and building networks of the barrio, village, and town support for the guerrilla cause.
Filipina Huks were tasked with winning over locals, convincing villagers and townspeople to defy the occupying Japanese troops, and, most importantly, to provide the basic necessities such as food, medical supplies, and temporary housing and cover for the guerrillas. Therefore, the critical efforts of Huk women—who provided the means for collecting the essentials for the Resistance—reveals the crucial role that female laborers played. Without the dedicated women operating as nurses, support staff, ralliers, and community contacts, the Huk resistance would not have gained enough momentum, and thus, would not have been as much of a threat to the Japanese occupation.
Felipa Culala of Candaba, Kumander Dayang Dayang 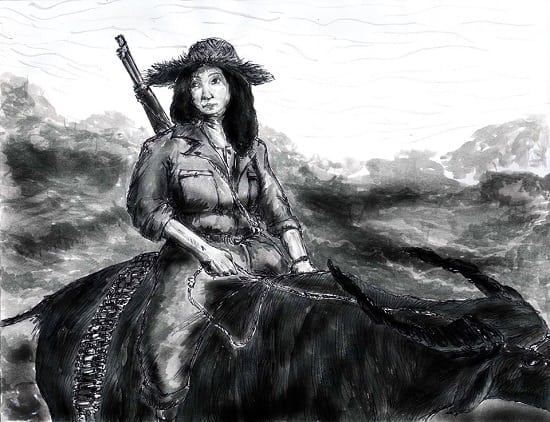 Artist’s sketch of Kumander Dayang-Dayang made by Dos Garcia. Source: https://filipiknow.net/filipina-heroes-of-wwii/
Culala was the only woman founder and elected member of the Military Committee of the Hukbalahap. Culala’s military rank afforded her the title of Kumander Dayang-Dayang, a name attributed to a famous Moro princess that translates to “a Princess of the First Degree.” The title “Dayang-Dayang” thus had a deeper historical background that further reinforced her leadership position amongst the Huks. She served as the only woman elected to the Hukbalahap Military Committee, where she operated as the head of Huk guerrilla units situated in the East Pampanga District of Luzon. ​
Accounts of those who worked with Felipa paint her in two radically different depictions: one as a strong leader who had a commanding presence, and another as an overbearing, haughty, conceited, and power-hungry woman who did not heed the Huk rules of conduct. It would be the latter depiction that came to define (and plague) Culala’s legacy. Eventually, Culula’s behavior became so disruptive to the Huk movement that her comrades put her on trial, convicting her of both tyranny and stealing supplies from helpless barrios, resulting in her execution by firing squad for such unwanted “behavior.”

The difficulty in finding solid resources on Culala, along with the surviving depictions of her “infamous” and “excessive” behavior that attack her based on characteristics attributed directly to her gender, reveals the excessive barriers of discrimination that Filipina guerrillas faced. Nonetheless, Culala remains the highest-ranked woman in the Huk resistance. As such, she should be remembered not only for her contributions to the underground resistance but also as a symbol for feminist Filipina empowerment.