The Battle of Hong Kong

The Battle of Hong Kong in 18 Days 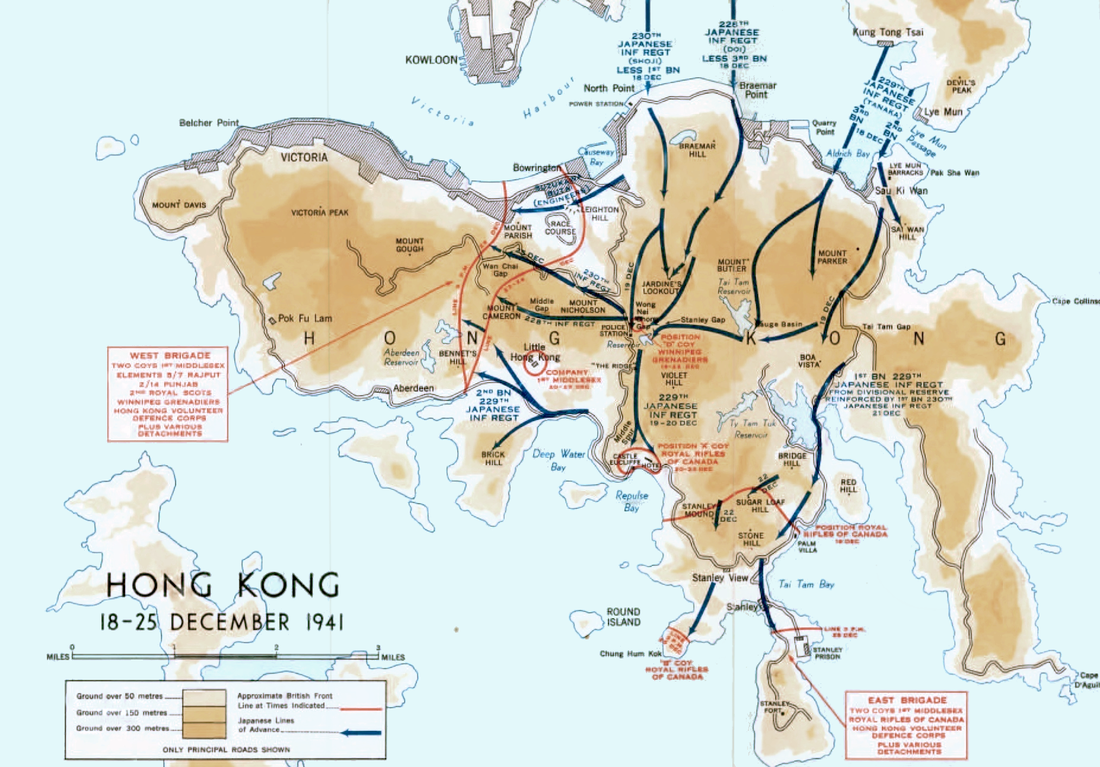 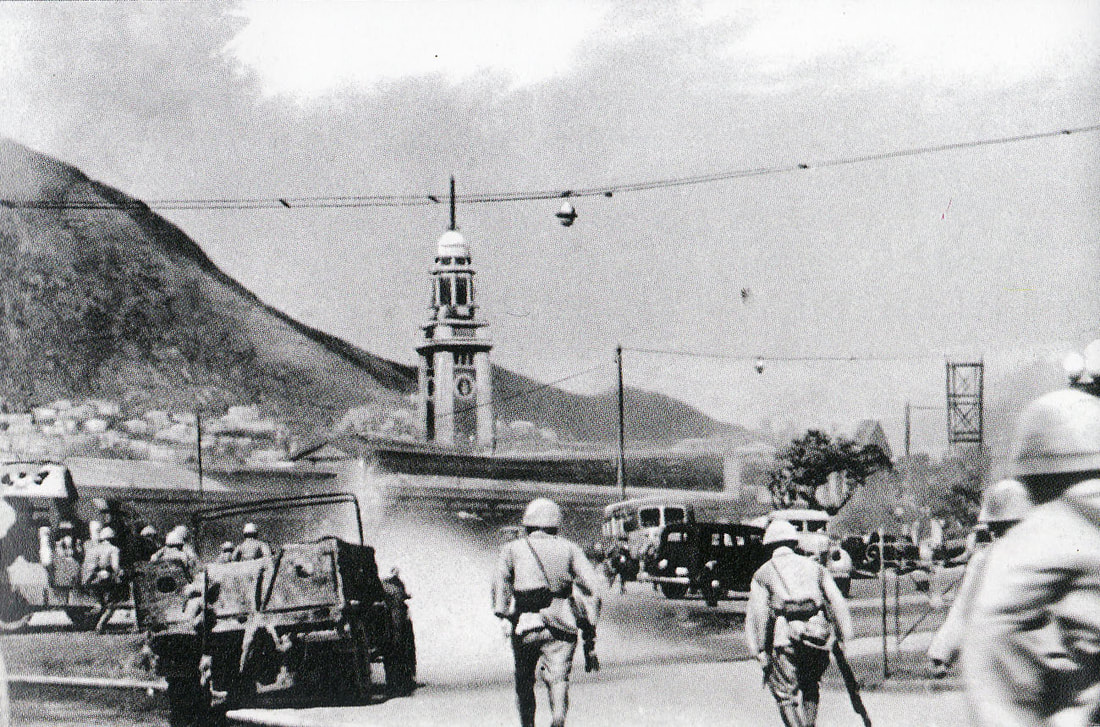 Japanese troops in Tsim Sha Tsui
By Mainichi Newpaper, Japan - booklet of "The Battle of Hong Kong- Hong Kong under the camera of the Japanese Army" Exhibition, Hong Kong Museum of History, 2002, Public Domain, https://commons.wikimedia.org/w/index.php?curid=4167929
On the evening of December 9th, the 228th Regiment of the Japanese Army launched another surprise attack after crossing the Shing Mun Reservoir.

British military leaders Maltby’s strategies on how to prepare against Japanese assaults were influenced by Euro-centric and racist assumptions that the Japanese soldiers could not see at night because of the stereotypical small eyes and therefore would not be able to attack after dark. A lack of resources and soldiers combined with misguided knowledge about the enemy made Hong Kong’s defense lines vulnerable from the outset.

The Imperial Japanese Army broke the Gin Drinkers' Line of defense within hours and the British troops withdrew into Hong Kong Island.

By the morning of December 10th, the Imperial Japanese Army overwhelmed 43 defenders in the Battle of Shing Mun Redoubt.

By December 15th, Japanese troops had crossed the Lye Mun Channel into Hong Kong Island. The Japanese Army had requested that Hong Kong surrender at this point, but was met with Governor Sir Mark Young’s firm declination.

In the meantime, St. Stephen’s College was converted into a temporary emergency hospital managed by two doctors and eleven nurses. By the time the Japanese soldiers found the hospital, the two doctors, Black and Witney, had already made plans to surrender the hospital. However, they were both murdered by Japanese soldiers. The Japanese troops then killed all the more than 100 wounded British, Indian, and Canadian soldiers they found.

“Nurses were raped, killed and mutilated … When we were herded out of the room, we passed the bodies of the men who had been taken from us … Ears were cut off, tongues cut out, and eyes gouged from their sockets hanging on their cheeks ...  The stench of blood, excrement, urine, and vomit just filled the air. It was a horrible scene.”
-- Bob Clayton at St. Stephen’s College at the time
Source: Hong Kong Veterans Commemorative Association of Canada,
​Canada in Hong Kong:1941-1945 The Forgotten Heroes (2002), 26.
For more information, please inquire Canada in Hong Kong, Last Modified April 8, 2015, Last Accessed August 23, 2019.

The Imperial Japanese Army used St. Stephen’s College as an example and threatened to kill all the British in Hong Kong if the governor refused to surrender. Following St. Stephen’s College Massacre, Governor Sir Mark Young surrendered Hong Kong. He signed on Christmas Day, 1941, in Room 336 at the Peninsula Hotel.
Hong Kong Volunteer
The HKVDC (Hong Kong Volunteer Defense Corps) deployed a total fighting strength of 2,200 men of all ranks in seven infantry companies, five artillery batteries, five machine-gun companies equipped with Vickers machine guns and an armored car platoon. Seeing light action in the New Territories at the beginning of the Japanese attack, the volunteers were heavily engaged on Hong Kong Island, especially during key battles of Wong Nai Chung Gap and Stanley. In spite of their valiant efforts, the HKVDC surrendered with the rest of the city on December 25th, 1941.
British Army Aid Group
Sir Lindsay Ride, the head of Field Ambulance in HKVDC, was captured and became prisoners of war. With the help of his student Francis Lee Yiu Piu, on January 8th, 1942, Ride escaped the camp with two other soldiers. Sir Lindsay Ride became one of the founding members of the British Army Aid Group that was formed to assist the Chinese Government with the approval of the War Office and support of General Wavell in the struggle against the Imperial Japanese Army. By the end of the war, many members of BAAG were exposed and executed. Despite their losses, BAAG after its official disbandment on December 31st of 1945, became a fully recognized division of the resistance forces in Hong Kong and was honored with.
Contributions of Canadian Soldiers
Canadian soldiers engaged in the Battle of Hong Kong as part of the British Crown Colony of Hong Kong. Canadian soldiers stationed in Hong Kong were primarily prepped for beach defense and reconnaissance in order to manage the rough hilly terrain. The units were also prepared to operate a full scale of demolitions to prevent valuable resources from being captured by the enemy should the Japanese forces take the mainland. In total, of the 1,975 Canadians who fought to defend Hong Kong, more than 1,050 were killed, wounded, or captured by the Imperial Japanese Army. Thus, the battle for the Canadians was a casualty rate of more than 50%, potentially one of the highest casualty rates of any Canadian theatre during the Second World War.
Guangdong Guerrillas
The Chinese guerrilla unit that was proactive in Hong Kong’s defenses was the Guangdong guerrillas. This unit originated in the Guangdong province and was also known as the East River Column. Despite the capture of Hong Kong on December 25th, 1941, by the Imperial Japanese Army, the East River Column still aimed to be a constant thorn in the side of the Japanese occupation force. During the occupation, the East River Column aided the English military in rescue missions as well as supplied communications. The guerrillas were one of the few friendly faces and line of defense for the locals, were the main source of security in safeguarding Hong Kong’s cultural and literary elite from the Japanese, and were the most skilled and resourceful in helping the Allies secure Hong Kong toward the end of the war.
Hong Kong Kowloon Brigade
Another group based out of Sai Kung was the Hong Kong Kowloon Brigade. They were formed by Choi Kwok-Leung and Chan Tat-Ming as commander and political commissar in 1942. Most of their 400 members were from the East River Column. They used weapons left by the defeated British forces which were 30 machine guns and several hundred rifles. The Hong Kong Kowloon Brigade had many rescue missions rescuing prisoners of war.