On August 14, 1945, after Emperor Hirohito issued a letter of surrender for Japan, an instructor of the Military Affairs Bureau of the Army Ministry, Niizuma Seiichi, gave written instructions to destroy all evidence to cover up the crimes of Unit 731 and other units. However, some evidence was still leaked by the time the war ended. In September and October of 1945, the Report of Scientific Intelligence Survey in Japan by the General Headquarters of the United States Army Forces, Pacific issued a fully detailed report on Biological Warfare. Then on November 9, 1945, the War Department of the Adjutant General’s Office issued a supplementary report on chemical and biological warfare.
​
However, even before the surrender, the United States Army Forces knew about the biological warfare being conducted. In a report dated December 3, 1944, with the subject of “Prisoner of War Interrogation” by the United States Army Forces of China Theater, a captured POW #229, Chimba Isamu admitted to the use of biological weapons. He graduated from the Medical College of Nagoya in the X-Ray Department and became an X-Ray Specialist (physician) in the 68th Division of Water Supply and Purification Department. He was captured in March 1944 by local guerrillas when he was separated from the Imperial Japanese Army in Jiujiang. The report stated, “From Nagoya, POW traveled to Hangchow, Chekiang Province, as follows: 420 draftees left in one group, under command (transport commander) of 2 Lt. (Med) Kobayashi of Nagoya Army Hospital. From Nagoya by train to Shimonoseki, ferry boat to Fusan; train (freight - cars) by way of Mukden, Shanghaikuan, Tientsin, Hsuchow, to P’uKow.” The reviewer of the interrogation noted in the same report, “The Chekiang campaign was the largest undertaken in China in 1942 and involved approximately 70,000 Jap[anese] troops and took place May-August. It followed the Doolittle raid of 18 April 1942.”​

In March of 1947, the United States decided to send someone qualified to interrogate the Japanese scientists who worked in the Ishii’s Network. Dr. Norbert H. Fell, a civilian employee from Fort Detrick, was chosen. From 1943-1969, Fort Detrick in Maryland was the center of the U.S. biological weapons program.
On September 2, 1945, President Truman appointed General Douglas MacArthur as the Supreme Commander for the Allied Power (SCAP) to supervise the occupation of Japan. It was under his decision that Emperor Hirohito should not be tried for any war crimes to keep Japan under control.
By November 1945, President Truman appointed Joseph Keenan as the Chief Prosecutor for the International Military Tribunal for the Far East (IMTFE). The prosecutors of the IMTFE included judges and prosecutors from eleven countries including Australia, Canada, China, France, India, Netherlands, New Zealand, Philippines, Soviet Union, the United Kingdom, and the United States.

Dr. Fell conducted conferences with Tomosada Masuda, Junichi Kaneko, and Dr. Ryochi Naito from April 28 to May 1, 1947. Dr. Naito stated during the conference, “We want to cooperate and know we owe it to GHQ, but we have a responsibility to our friends. We took an oath never to divulge information on human experiments. We are afraid some of us will be prosecuted as war criminals. We do not know how much others will be willing to give us. If you can give us documentary immunity, probably we can get everything. The subordinates, not the section chiefs, know the details. If we contact someone who is a Communist, he is liable to tell the Russians.” Dr. Naito was able to secure immunity for himself and his friends in exchange for biological weapons details given to Dr. Fell for Fort Detrick. The IMTFE that lasted from May 3, 1946, to November 12, 1948, did not hold the Japanese biological warfare in violation of international law although it was very obvious that it was a violation of the Geneva Protocol signed in 1925. Further, none of the prisoners captured related to biological warfare had to stand trial in the name of national security. The investigation of the biological weapons did generate interest from the Soviet Union. The United States used it as a political weapon and interrogation tactic for the Japanese personnel since their fear of the Soviet Union allowed U.S. prosecutors to collect more information.

The Soviet Union had known long before the war was over that the Japanese were conducting biological weapons research in Harbin. During the end of the war, the Soviet troops entered Manchuria, also known as a puppet state by the Japanese, Manchukuo on August 8th, 1945.
“What was most puzzling to the Soviet and Chinese officials was the fact that the area surrounding the ruins was a veritable Noah’s Ark. Tens of thousands of rodents roamed in and around the devastation of the formerly secret bases. Other small animals, such as rabbits and guinea pigs, were found there in huge numbers. Herds of sick cattle, sheep, goats, and other livestock, as well as mules and donkeys, were discovered untended nearby. Even more puzzling was the fact that hundreds of monkeys wandered in the vicinity, while several unattended camels meandered about. New and shocking discoveries soon took place. Buried beneath the rubble were untold thousands of animals and human bones, pieces of clothing, and artifacts that suggested they once belonged to humans.” - Sheldon Harris, “Factories of Death” 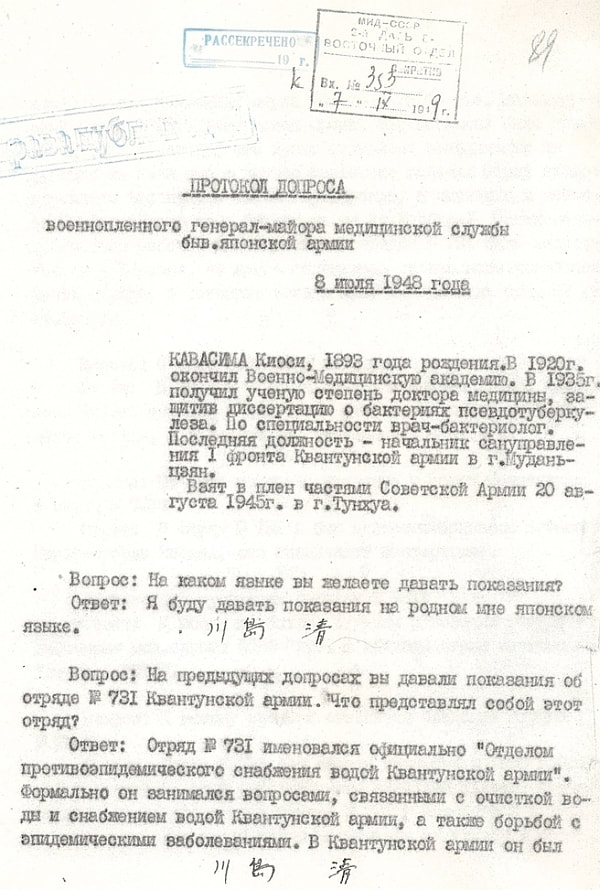 Fragment of the interrogation protocol of the prisoner of war Kawashimo Kiyoshi, the former head of the department of bacteriological Unit 731.
July 8, 1948
In a memo on July 1st, 1947, for the Pentagon and the Navy from J.B. Cresap, the Secretary of the United States Navy, concluded that prosecuting Japanese for biological warfare would not be great for national interest for the United States. This sentiment weighed heavily especially in the eve of the Cold War. This was what the memo stated, “It is concluded that: The Russian tactic of persuasion did eventually convince the United States to release some of the personnel related to biological weapons to be sent to Russia for trial. Twelve members of Japan’s biological weapons unit were sent to the Khabarovsk War Crimes Trial. It was deemed by the West to be a form of communist propaganda, but it released a significant amount of details regarding human experimentation and the development of biological weapons.

The USSR tactic of persuasion did eventually convince the United States in releasing some of the personnel related to biological weapons to be sent to Russia for trial. 12 members of Japan’s biological weapon unit were sent to the Khabarovsk War Crimes Trial. It was deemed by the West to be a form of communist propaganda, but it released a lot of details regarding human experimentation and the development of biological weapons.