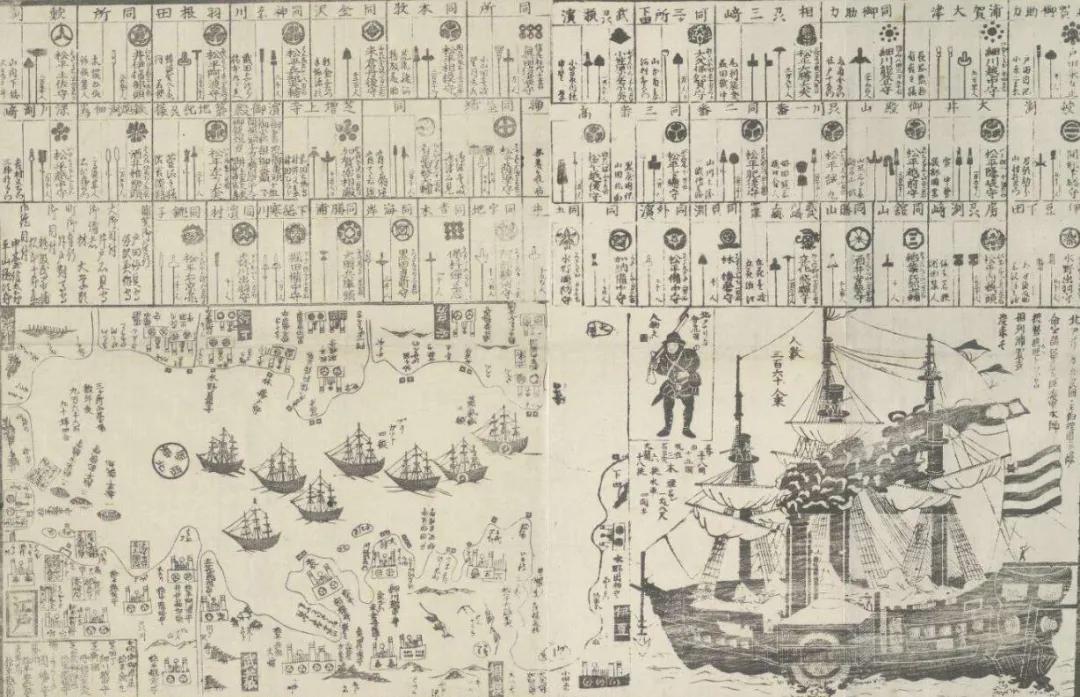 1854 Japanese print depicting the Matthew C. Perry expedition. Source Wikipedia
The First Opium War saw the Qing Dynasty, a leading power in Asia, fall to Great Britain. It was only 10 years later when Japan also faced the dominance of Western imperialism, in the form of Commodore Matthew C. Perry. Perry managed to force the Japanese to sign the Kanagawa Treaty, effectively ending Japan’s isolationist policy. A few years later Townsend Harris, the first consul general of Japan, arrived to negotiate a new treaty. The event coincided with the “Arrow” War (Second Opium War), which saw the British and French defeat China. Harris argued that if Japan did not accept America’s terms, they would meet a similar fate as China. However, what the Japanese officials did not realize was that the American treaties were only slightly more favorable than the British and French. The Harris Treaty (Treaty of Amity and Commerce) included the opening of more ports in larger cities, counselor jurisdiction, and extraterritoriality. Notably, the economic restrictions such as the ban of tariffs on foreign goods, limited their ability to modernize. The new treaty sparked animosity toward the West, as it tarnished Japan’s prestige. Political tension within Japan caused by the American treaties led to a civil war. The Tokugawa Shogunate fell to the Satsuma and Chōshū domains in the Boshin War, and sovereignty was restored to the emperor.

From Matthew Perry to the Russo-Japanese War

The Meiji Restoration that followed transformed Japanese society. The nation’s new goal was to catch up to the West and modernize in order to prevent another incident like Perry. The Japanese adopted many facets of western thought ranging from military theory to clothing. However, modernization did not entail democracy. The government heavily restricted the media and prevented others from gaining political power. They suppressed the well-educated civilians to prevent uprisings, especially the Samurai class. The government implemented stronger restrictions after the war against the Satsuma Rebellion (Seinan War) and the rise of the People’s Rights movement. They prohibited writings, notably textbooks, with pro-democratic and liberal ideas, and instead pushed for conservative Shinto and Confucian values.
The Meiji Restoration also coincided with the era of racial science; Western science could empirically “prove” their superiority over the Japanese. The Japanese had formed their own theory of racial superiority through the Yamato race. According to legends, the Yamato people are the ancestors of the Japanese race. Academics argued that their unique and “pure” quality make the Japanese a superior race. The government also enforced the Emperor’s sacred authority through Shinto mythology. In 1890, the Department of Education issued the “The Imperial Rescript on Education,” which required devotion toward the Emperor and the pursuit of Confucian ethics. 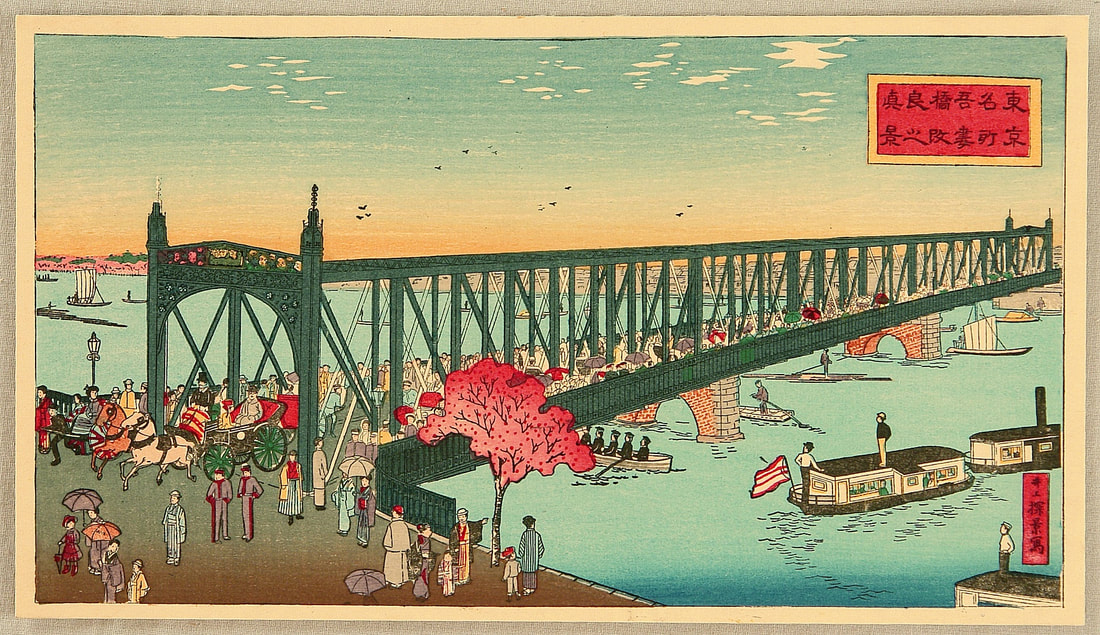 Japanese graphics 19 century. Source Wikipedia
The new imperial government adopted a western-style military and recruited several officers from European nations. The Army initially adopted a French model, including military academies, a conscription ordinance, and weaponry. Their first test was against the Satsuma Rebellion, a group of Samurai resentful of their loss of privilege. What started as Saigo Takamori and Itagaki Taisuke’s resignation over the military expedition to Korea led to a full-scale civil war between the Samurai class and the Imperial Army. The Army eventually defeated the rebellions, but it exposed the vulnerability of the Army’s conscription system and their lack of fighting spirit.
China also acted to maintain its sphere of influence over Korea. In 1894, the Sino-Japanese rivalry culminated in war, in which the Japanese came out victorious. The aggression seen during the war foreshadowed the atrocities committed by the Japanese in the 20th Century, notably 60,000 Chinese (soldiers and civilians) were massacred in four days following the capture of Port Arthur. Additionally, many Japanese soldiers had expected a rich and cultured civilization. In reality, most of China was impoverished; this led to racial stereotypes toward the Chinese and sentiments of Japanese superiority.  Japanese writer Kansuke Naka recounted his elementary school years and explained the racial tensions forming between Japanese and Chinese peoples, “After the war started, my friends would talk of nothing else but the ‘brave Japanese, the cowardly Chinks.’ The teachers urged us on like a pack of puppies whelping after a Chinese bone. We repeated it at every chance.”
The Western powers intervened six days after the signing of the Treaty of Shimonoseki. Russia, Germany, and France forced Japan to return to the Liaodong Peninsula. It was a sign that the West still saw Japan as inferior. As the Russian presence grew in Manchuria, there was a growing risk that they would invade Korea. Japanese leaders saw the significance of Korea as crucial to their imperialist goals for expansion. The Japanese launched a surprise attack on the harbor at Port Arthur and declared war on Russia (Russo-Japanese War). Japan surprised the world by defeating the Russians, thus gaining exclusive rights in Korea and the Russian railroad lines in Southern Manchuria. Japan thus became internationally recognized as a leading power, heightening its beliefs of both Japanese political and cultural supremacy.