Throughout the expansion of the Japanese Empire, Ishii’s reach expanded with it. He was able to build his network with its headquarters named Ping Fan located 24 kilometers south of Harbin. Ping Fan was in reality a cluster of 10 combined villages. The Imperial Japanese Army used force to sweep the villagers out from 144 acres in 1936, underpaying for their land and forcing them into poverty during cold Manchurian winters.
Abusing his power, Ishii granted Nihon Tokushu Kogyo Co. Ltd. a monopoly to supply the unit with all necessary equipment and, in turn, he received a handsome kickback. Suzuki, a Japanese construction company, worked day and night when possible, but due to Manchuria’s weather, there were times when it was impossible to do so since everything had iced over. Chinese laborers who were hired to construct the complex were denied any basic human rights and wore rags even during cold weather. Some died from the cold and were tossed into a pit, their clothes and valuables passed on to the next laborers who needed them. The laborers slept in tents that barely sheltered them from the winter and meals consisted of pickled vegetables and dumplings. There was almost no difference in the attitude toward the Chinese laborers and the subjects of experiments. Since there were so many Chinese, it did not matter if one or two died because there would always be others. All equipment for Ping Fan came from the United States or Europe. Having a project of such grand scale, Ishii was in control of an annual budget of at least ten million yen though merely a Lt. Colonel in the Medical Corps in 1936. His life in Manchuria was lavish as he commuted to work in a limousine. His residence in Harbin was a sequestered Russian mansion for his wife and their seven children. 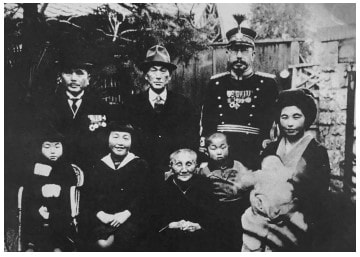 Ishii’s with family in Manchuria, 1938
Ishii had always been known as ambitious and Ping Fan was no small scale laboratory. It consisted of 76 buildings in the base compound with a library, bar, state of the art dormitory buildings, warehouses, brothel, and Shinto shrine; it resembled a city within itself with special tunnels for railroads. Civilian airlines were not allowed to fly into the territory and violators were to be shot down. Locals were told Ping Fan was only a lumber mill and most were too afraid to ask questions. The role of prison warden was assigned to Ishii’s own brother, Mitsuo, to ensure no secret leaked out.

During the opening of Ping Fan, Ishii addressed his employees in the following speech:

"​Our godgiven mission as doctors is to challenge all varieties of disease causing microorganisms; to block all roads of intrusion into the human body; to annihilate all foreign matter resident in our bodies; and to devise the most expeditious treatment possible. However, the research work upon which we are now about to embark is the completely opposite of these principles, and may cause us some anguish as doctors. Nevertheless, I beseech you to pursue this research, based on the dual thrill of 1), a scientist to exert efforts to probing for the truth in natural science and research into, and discovery of, the unknown world and 2), as a military person, to successfully build a powerful military weapon against the enemy."

His speech often soothed the scientists with the greatest doubts as to why they were spending their efforts on harmful weapons instead of curing people.
As the war front expanded throughout Asia after 1937, subsidiary units associated with Ishii’s Unit started to appear in Asian cities and towns. These units were under the cover of Epidemic Prevention and Water Supply Departments. In 1938, Unit 1855, otherwise known as the Central Epidemic Prevention and Water Purification Department of the North China Army was established in Beijing. By 1938, Ishii Shiro was promoted to the rank of Colonel. In 1939, Unit 1644 was established in Nanjing and Unit 8604 in Guangzhou. Notably, by the end of 1939, right before the establishment of the Singapore unit, Ishii’s network comprised a total of 10,045, of which 4,898 were assigned to the core units in Tokyo and Ping Fan. On March 26, 1942, Singapore’s Unit 9420 was established. There were other detachments for biological weapons including Detachment 673 in Sunwu, Detachment 543 in Hailar, and Detachment 162 in Linkou.

Ping Fan Unit 731 complex
At the time, the Japanese army internally referred to the units related to Ishii’s biological warfare and the epidemic prevention laboratory of the IJA Medical School as the “Ishii Network” and considered the epidemic prevention laboratory as its research center. This laboratory connected researchers from both inside and outside the military and organized and mobilized the Japanese medical community and civilian research organizations to participate in military medicine and epidemic prevention, including research related to biological warfare, in the form of commissioned research, joint research, paper guidance, and more. Many of the doctoral dissertations done in Japan’s medical field at the time sprang from field tests from Ishii’s Network. Japanese researchers spent time as visiting scholars at Unit 731 conducting human experimentation and more for advances in the medical fields of the Empire. Human experimentation at the time was an open secret in Japan. Most of the papers were labeled with Manchurian monkeys as test subjects but nearly everyone in the scientific community knew the reports were based on real human experimentation.