The Bacteriological Warfare on China

The Imperial Japanese Army had been producing biological weapons in the Ishii Network. According to a Memorandum for Major General Wilhelm D. Styer from Lieutenant Colonel Howard I. Cole of the Chief Intelligence Branch of the Special Projects Division, the bacterial warfare sabotage was likely to have started since at least 1941. This statement was supported by “a Japanese document captured at Morotai, 24 September 1944, classified secret issued by E 33rd Force, dated 1944, and belonging to 2nd Lt. Heriuchi, “NI” Force, contained details of the organization, functions, and equipment of “Raiding Diversionary Unit.” This report was partially correct as the attacks actually happened as early as 1940; Japan had conducted biological warfare in China according to one of the testimonies during the Khabarovsk Trial. General Ishii led a group of other officers of the detachment to deploy plague-infected fleas onto the general population in September 1940. By December 1940, a plague outbreak happened in Nimpo in Zhejiang Province. These types of attacks were mostly used on a small scale as early adoptions and testing of the biological weapon until the Doolittle Air Raid in Tokyo.

By the end of 1941, after Pearl Harbor, President Franklin Roosevelt desperately wanted revenge. However, due to the distance between the United States and Japan, it was proven to be a difficult feat. In January of 1942, someone came up with a solution to launch B29 bombers from the Hornet's flap from San Francisco and land in China where they had only enough fuel to land. The person to handle training the team was decidedly Lieutenant James “Jimmy” Doolittle, known to be the first American pilot to fly coast to coast with only one stop for fuel. On April 1st, 1942, the first Doolittle Raid was launched. Then, another obstacle arose; China was occupied by Japan. Chiang Kai Shek, the official Nationalist government leader at the time promised five airfields for the Allied powers to refuel, but did not guarantee that the pilots could land safely. The pilots needed to land at night to avoid being attacked by the Japanese soldiers in their airfields. The Doolittle Air Raid was an incredibly difficult task, the pilots had less than a 50% chance of surviving the task, but Chinese civilians spotted Doolittle’s pilots and often helped them out. 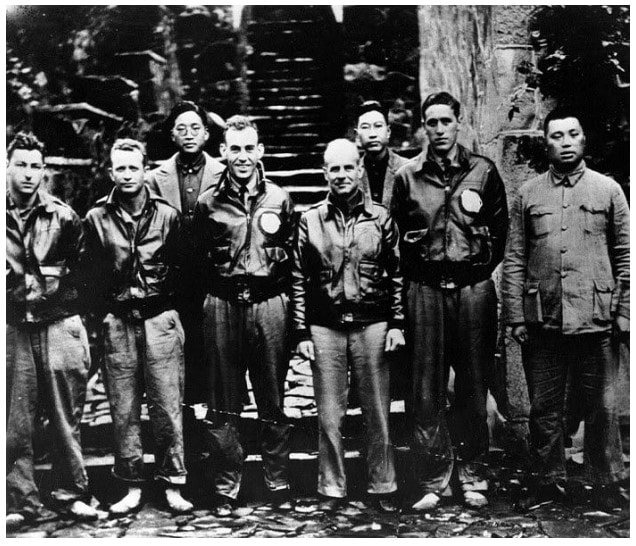 Doolittle and flight crew in China after the raid in April 1942.
One of the most celebrated accomplishments was the bombing of Tokyo, Kobe, and Yokohama as well as an ammunition factory. However, the bombers did less damage 19 to the structure than it did to the Japanese ego causing a nasty vengeful attack on China, causing the death of 250,000 Chinese civilians. The IJA’s China Expeditionary Force sent 180,000 men as well as a bacteriological warfare unit to launch a full-scale campaign in the Zhejiang-Jiangxi region, Operation Sei-go, also known as the Zhejiang-Jiangxi Campaign, from mid-May to early September 1942. The main goal was to remove threats from Zhejiang Airfields. The campaign was bloody, anyone who was shown to be connected with an American was killed instantly, and women were raped by soldiers. At the same time, they spread cholera, typhoid, plague, dysentery, glander, and anthrax in the region. This bacteriological warfare operation was confirmed with Major General Kawashima Kiyoshi who worked at Unit 731, and stated during the Khabavorsk Trial, “My unit could produce 300 kilos of plague bacteria, 1000 kilos of cholera bacteria, 800-900 kilos of typhoid, and 500-700 kilos of anthrax in a month. In 1942, General Ishii led 150 soldiers to disseminate plague, cholera, typhoid, and anthrax in the Zhejiang-Jiangxi War.” In another meeting in 1942, Ishii Shiro stated, “The bacteria weapons used in Zhejiang-Jiangxi War Zone were very effective, causing several fierce epidemics.” 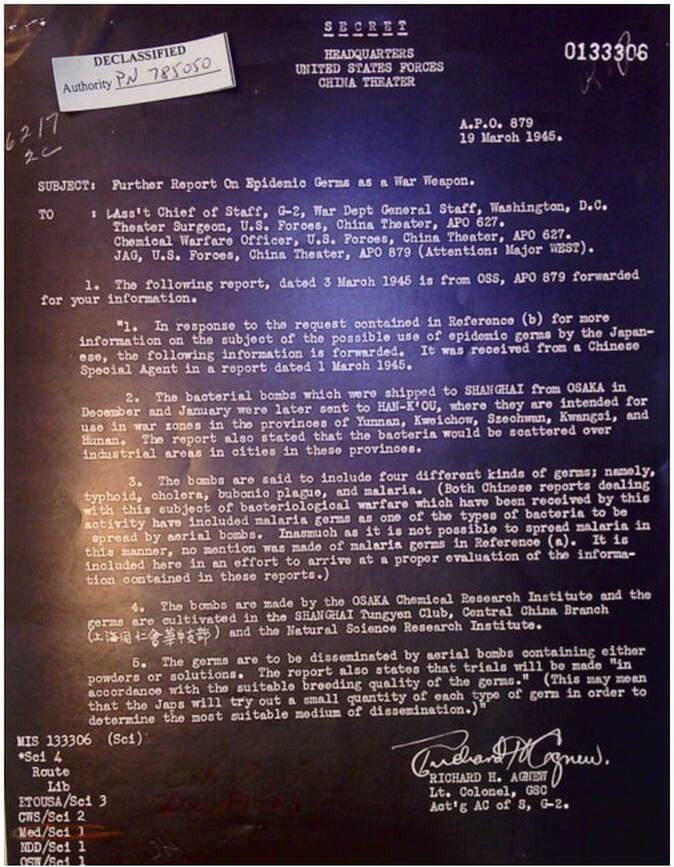