Beginning in 1940, Indochina was dominated by three major parties: the French, the Japanese, and the ICP. Each party, especially the Japanese, fundamentally changed Indochina’s economic and political scene, which brought about both revolution and disaster. The entry of the Japanese into Indochinese affairs was only cemented with the German defeat of France and the establishment of the Vichy government in the June of 1940. The advent of a new, German-allied government in France made it easier for the Japanese to expand their interests in the region, as represented by the Japanese bombing of Hai Phong and the Battle of Lang Son on September 22, 1940. A day after the bombing, the Japanese and French signed an agreement that would allow the Japanese to use the port of Hai Phong and garrisons in the Lang Son area. This provided a strategic base for the Japanese to attack southern China and other parts of Southeast Asia. 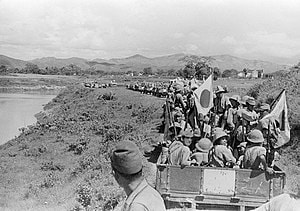 Imperial Japanese Army soldiers approach Lang Son, in September 1940 in French Indochina. Source:Wikipedia
Additionally, the Japanese military presence in Indochina allowed them to requisition provisions, especially rice, for their own troops. Although no requests were made by the Japanese, French Indochina exported 468,280 tons of rice to Japan. This consisted of 25.9% of Japan’s total rice import for the year. In later years, the tons of rice exported to Japan, as well as the percentage of Japan’s total rice import, would increase as Japan gained control of the Indochinese economy. The relationship between the Japanese and Vichy governments would come to define the agricultural and economic policy that affected the lives of millions of Vietnamese.
The advent of the war had an especially large impact on the farmers of Cochinchina, whose livelihoods were more dependent on the global market. The drop in rice prices due to the fall in demand from China, combined with the high taxes collected by the French government and the high cost of living, led to economic hardships for the farmers of the Mekong Delta. At this time, the ICP’s network in Cochinchina was highly developed, even more than the Tonkin and Annam regional committees’ networks. To the southern regional committee, the circumstances caused by the war, in particular by the threat of the Japanese-allied Thailand, were ripe for an armed insurrection.
The regional committee planned the revolution for November 22, 1940, and while the Seventh Plenum had decided to call off the uprising, the decision did not reach Cochinchina due to the arrest of the messenger. The plan was discovered by the Surete, and the numerous attacks on various military bases ended with failure. This led to the effective destruction of the ICP’s network in southern Indochina, similar to the destruction of the ICP’s network in Annam nearly a decade before.66 High-level ICP members were executed, and thousands more were arrested whether or not they were involved in the mistakenly ordered uprising. In addition to wrecking the southern ICP network, this altered the balance of power between the northern and southern leaders within the party. Now, power lay in the hands of the northern and central Vietnamese leaders, which would change the course of the ICP’s and Vietnamese history towards a different strategy of insurrection.

1941: The Rice Accords and the Formation of the Viet Minh

If the events of 1940 introduced all of the major players vying for control of Vietnam during the Second World War, the events of 1941 established the paths they would take towards the climax of 1945. The decisions made by the Vichy French, the Japanese, and the ICP in 1941 founded the institutions and relationships that would come to define the following years.
The most important development in Vichy-Japanese relations took place in the first half of 1941, with the signing of the “Accord Commercial Franco-Japonaise” in Tokyo. This agreement effectively tied Indochina’s economy to Japan. Many Japanese imports were free from tariffs and the complicated payment system was designed to fulfil Japan’s wartime needs. It provided Japan with the total surplus of the rice and corn harvest, as well as rubber and minerals. The Japanese requested Governor General Decoux to sign an agreement about the exportation of 100 tons of rice from Saigon to Japan and the transportation of a million tons of rice for the Japanese military in one year, including the amount of rice to provide for ten thousand Japanese troops stationed in Indochina.
In addition to exporting rice to Japan at tariff free rates using a complex payment system, the French government was also obliged to provide ten thousand Japanese troops stationed within Indochina with provisions. Initially, the yearly export was set at one million tons of rice and corn.[1] This accord accelerated the exploitation of Indochinese farmers, especially those in regions where subsistence farming was the primary mode of food production.
In order to control the market in Cochinchina in advance of the exports, the French formed the Comité de direction pour le commerce et l’exportation des paddy, riz et dérivé. The northern equivalent was the Directions des Services Economiques based in Hai Phong. 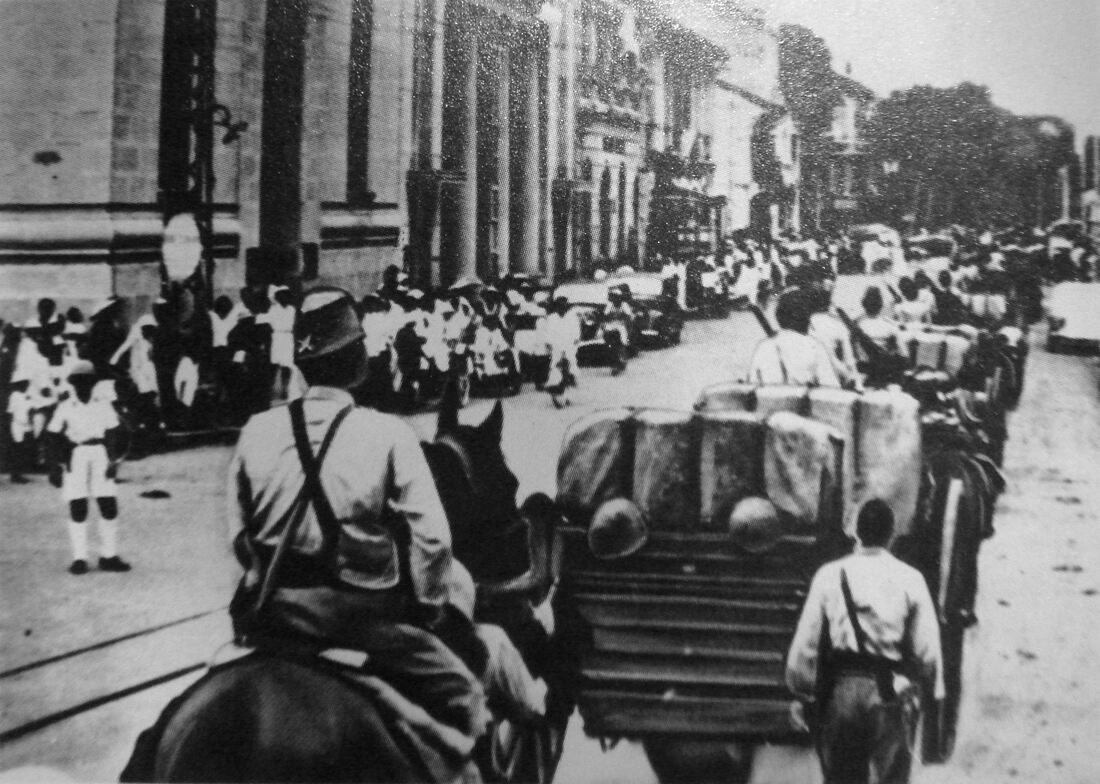 Japanese troops entering Saigon in 1941. Wikipedia
Conducted in the mountainous homeland of the Nung ethnic minority, the famous Nguyen Ai Quoc (later Ho Chi Minh) presided over the meeting, which was dominated by representatives from the north and central regions. The most important decision made at the plenum was the decision to temporarily put aside the bourgeoisie-democratic revolution and focus on the national liberation revolution. By choosing to focus on national liberation, the ICP gained the ability to take advantage of Vietnamese nationalism and therefore obtain popular support, even from non-communists.
The formation of the League for the Independence of Vietnam, commonly known as the Viet Minh, was the key to obtaining this popular support. Based on the concept of the popular front, the Viet Minh front was technically an organizational front of the ICP, but this was disguised through the creation of “National Salvation” organizations that translated communist jargon into easily spreadable slogans for the common people, communist or not. From 1941 onwards, the Viet Minh would serve as the ICP’s primary organizational front.