A few days after the Japanese planes flew over the town, the local population discovered small black or red dots on their bodies, usually on their legs. As diseases developed, many died, but those who survived later developed rotten leg ailments. Nearly all of the people with rotten leg ailments who are still alive were teenagers or even toddlers when they first developed the symptoms in the 1940s. There is evidence, but no direct proof, that the Japanese Army conducted large scale anthrax warfare in many areas of China in 1941, including Yiwu, Zhejiang Province, and Changde, Hunan Province.
Chongshan Village in Yiwu is the hometown of Wang Xuan's father and the place where she has lived for many years. In 1940, the Japanese Army conducted large-scale plague warfare in Yiwu, Zhejiang Province, which killed over 1,300 local citizens, among whom were 403 villagers from Chongshan Village. When the Japanese left, having accomplished most of their goals, they left behind a trail of devastation. The victims of germ warfare in China had lived silently with their rotten leg disease for decades. Little was known even to the Japanese public until 1981 when the book “The Devil’s Gluttony” was written by Seiichi Morimura. In 1997 court action was brought against the Japanese government seeking reparations for the Chinese victims of the Japanese germ warfare. On August 11, 1997, 180 plaintiffs who were victims of the biological attacks sought compensation for the damage that had been inflicted upon them. The Tokyo court confirmed that Unit 731 did conduct germ warfare in China killing many and causing injuries from bubonic plague, typhoid, and other related diseases. However, the Japanese government continues to deny that its Army ever used biological agents in China. Wang Xuan has said that it would be an eternal shame for human civilization if the war crimes of the Japanese Army's germ warfare were not recognized publicly and appropriate punishment pursued. Thus, she continues her journey seeking direct evidence for the truth. ​ 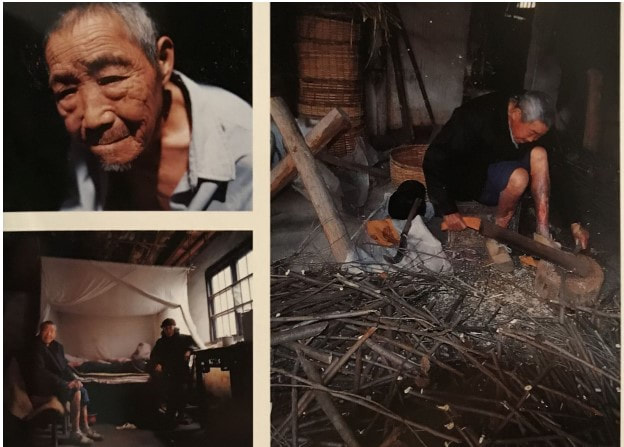 He Fuxin, a male, born in 1919, farmer, Jinhua City
In August 1942, when I was 23 years old, six out of seven members in my family were infected by ulcerative skin lesions on the legs within a month. In the beginning, there were itching and burning blisters on our legs. Then about five days later, our legs began to ulcerate, and black flesh and blood dropped off all day. The skin around the wounds was as black as charcoal. My grandparents, parents, and aunt all died of it. Only two in my family survived. At that time, about 80 residents in our village were infected by ulcerative skin lesions on their legs. I have spent several ten thousand yuans to treat my legs for 60 years. However, the infection has never been cured and several decades of pain and suffering made me doubtful it ever can be.

In 2002, “Factories of Death” by Sheldon Harris was released; the subject was Japan’s biological program during WWII and it was the first book that caught the attention of mainstream America. Utilizing documents from various U.S. government agencies’ archives, it shone a light on the complicated and challenging task of gathering evidence about biological weapons, involving documents from dozens of archives of different government agencies. It was also the first time Wang Xuan’s work was recognized internationally. Besides finding evidence and seeking justice for the victims, Wang Xuan had also led study tours in Yiwu to educate others about the effects of biological warfare. Investing 31 her own time and money, she has tirelessly sought care for victims suffering from rotten leg disease, bringing in specialists from the United States, including Martin Furmanski, MD, to visit Changshan to seek the root cause of rotten leg disease. It was this endless amount of work that led to the conclusion that victims were suffering from anthrax and glanders. 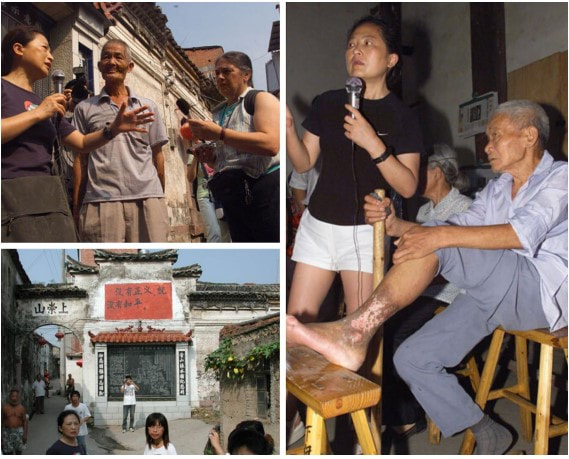 Wang Xuan with a victims of human experiments.
Finally, in 2014, Xuan launched programs with several hospitals in Shanghai to provide effective treatment for the victims including wound cleaning, a series of skin grafting which otherwise could have been prohibitively costly. After more than 70 years of suffering, some of the victims finally could wear socks and shoes to visit their relatives and took life-changing steps. Zhejiang, previously romanized as Chekiang, is an eastern coastal province of China comprised of counties such as Hangzhou, Ningbo, Wenzhou, Jiaxing, Huzhou, Shaoxing, Jinhua, Quzhou, Zhoushan, Taizhou, and Lishui. Currently, Alibaba headquarters is located in Hangzhou, and Jinhua city includes Yiwu, home to the largest wholesale markets.