San Francisco, CA: Pacific Atrocities Education gathered a group of up and coming young artists to perform an original play, Forever Ginling, to commemorate the 70th anniversary of the end of WWII.Forever Ginling, is an original play first conceptualized by Jenny Chan, the cofounder of Pacific Atrocities Education. She was inspired to start a non-profit after reading Iris Chang’s Rape of Nanking and learning about another heroine, Minnie Vautrin. Both women were alumni of UIUC, where Chan graduated from in 2012. She was inspired by the fact that Minnie Vautrin, an everyday woman, decided to stay in Nanking during the Japanese invasion and saved over 10,000 women and children.

On September 24th, Forever Ginling, rewritten and directed by Arash Shahabi, a Persian American raised in the Bay Area. Growing up in post 9-11 America, Shahabi channels his own experiences with adversity to tie in modern elements and characters, including Iris and Doug, to connect the Rape of Nanking to the 21st century America. The show will run on for the weekend of September 24, 25, 26, and 27. The opening gala on Thursday, 24th September will kick off with a Chinese vocalist, formerly a music instructor in City College of San Francisco, Wilma Pang, who will open with 1920 Jazz from China, also known as “Shidaiqu”, before the Japanese invasion. During the time, it was a women dominated Chinese music scene, and the opening gala will include tunes such as Ye Shanghai, Rose Rose I love you, Four Seasons, and Tube Rose.

Started in the middle of July, Pacific Atrocities Education started running an ad campaign on bus tails as well as in front of the public toilets in San Francisco. The public toilet ads was inspired by Iris Chang’s words in the Rape of Nanking, “Untold numbers of these women (whom the Japanese called ‘public toilets’) took their own lives when they learned their destiny; others died from disease or murder.” Having Forever Ginling ads in front of public toilets is not a way to only remind the public on the topic of an unresolved massacre in China, but to also remind them the brutality done to women. 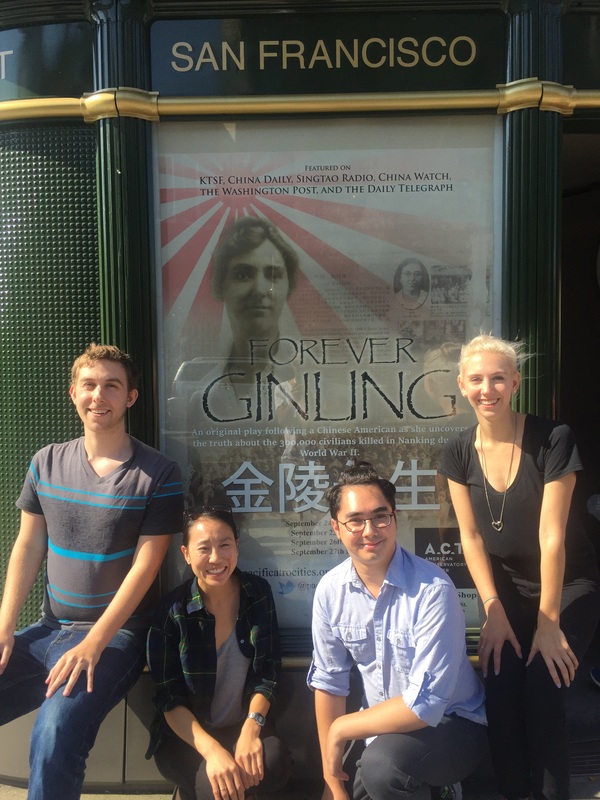 
The Japanese Prime Minister, Shinzo Abe, is visiting the U.S. at the end of this month, and as one of the U.S.’s strongest allies in the pacific region, his visit has most in high spirits. Although it is expected to be a friendly occasion, the Prime Minister’s recent controversy over the historical truth of the emphatically termed ‘Comfort Women’ system has become a topic of debate.

Despite the widely accepted historical facts about the Japanese Imperial Army’s system that forced an estimated 200,000 women from China, Taiwan, and Korea into sexual slavery, Abe and other right wing Japanese nationalists have recently made national and international attempts to rewrite this part of history.

Abe’s visit is coming near the 70th Anniversary of the end of WWII, and congress is demanding that he take the opportunity to “formally acknowledge, apologize, and accept historical responsibility in a clear and unequivocal manner for [Japan’s] Imperial Armed Forces' coercion of young women into sexual slavery, known to the world as ’comfort women.’ ” –H.R. 121, 2007

The pressure is high for Abe to make right his recent slates towards ‘comfort women’, but given Japan’s current relationship with the U.S. , it does not seem likely that he will face any consequences from the U.S. government if he decides to forego an apology.

Pacific Atrocities Education, a non-profit organization dedicated to bringing awareness to Pacific-based atrocities from WWII, has coordinated a protest to support congress in their demands for a formal apology from Abe. The protest joins continued international efforts by historians, activists, and even presidential runner Hilary Clinton, to establish the historical truth of the ‘Comfort Women’ system.